What Genetics Can Tell Us About History

How sure are you about your cultural and ethnic heritage? DNA evidence is uncovering truths quite different from those in our history books.

In 1903, two workmen began digging a drainage ditch in a cave not far from the English village of Cheddar (yes, where the cheese comes from). While completing this routine work, the workmen stumbled upon a gruesome discovery: the complete skeleton of a male. The unfortunate owner of the bones had been pretty short — around 5’5” tall (165cm) — and the bones suggest he suffered a violent death. Yet, this wasn’t a case for the murder squad; the perpetrator of the crime was long dead. The body found near Cheddar was 9,000 years old.

Even though it’s been over a century since the discovery of Cheddar Man, we’re still uncovering new information about him and the community of nomadic hunter-gatherers to which he belonged. In fact, one of the most fascinating discoveries was announced just this year. Scientists had extracted and analyzed Cheddar Man’s DNA and discovered his skin, hair and eye coloring. They found that he probably had blue eyes, dark, curly hair and – in contrast to previous thinking — “dark to black” skin. What’s more, the genes determining Cheddar Man’s skin, eye and hair color were also present in other hunter-gatherer skeletons found throughout Europe. In other words, the DNA evidence suggests that the hunter-gatherer populations who first colonized western Europe were not pale skinned, as previously had been thought.

These recent discoveries about European prehistory are evidence of just how useful DNA analysis is for historians. This is especially the case when studying those early periods in history where written and archaeological evidence is scarce. After all, just what can you tell about an ancient people who left us no records? In these “dark” periods of history, myth and tradition often fill the gaps in our knowledge.

For example, consider the long-established take on the early history of Britain and Ireland.

It began when tribes of (pale skinned) hunter-gatherers crossed over to Britain and Ireland as the ice age glaciers began to retreat. Then, about 500 years or so before the Romans arrived in 43 AD, the Celts invaded. Celtic tribes from the European continent flooded into the British and Irish isles bringing with them their customs, unique art and language.

The Romans occupied England and Wales for 400 years, “civilizing” the native Celtic populations (presumably, leaving the Celts in Scotland and Ireland uncivilized). But, 410 AD, they abandoned Britain, leaving the local population to fend off invasions by Germanic tribes along England’s eastern coast. They failed; the Anglo-Saxons (as these tribes were collectively known) flooded into England, and the Celts were pushed to the western fringes — Wales, Cornwall, Scotland and Ireland.

This was the history taught to generations of children — I remember learning it at school — and the national identities of Britain and Ireland are largely built upon it. The cultures and traditions in Ireland, Wales and Scotland are based on a shared Celtic identity. The English identity, on the other hand, is closely tied to their supposed Germanic, Anglo-Saxon ancestry.

Yet, while this history is well established, it doesn’t mean it’s accurate. In fact, the DNA evidence suggests that the long-established prehistories of Britain and Ireland aren’t true.

For one, it appears that the “Celtic Invasion” of Britain and Ireland never actually happened. If there had been a mass migration of Celts, we’d see it in the DNA, but it’s not there. Across Britain and Ireland, there is absolutely no genetic evidence of foreign invasion or settlement during the Celtic period.

But, even if the people of ancient Britain weren’t actually Celts, the story of their displacement by Anglo-Saxons and their flight to the western fringes is true, right? Again, the DNA suggests not.

A 2016 study which looked at the DNA of 10 ancient skeletons found in Eastern England found that Anglo-Saxon DNA makes up only around one-third of the DNA of modern Britons. What’s more, the study also found that while some of the skeletons were those of Anglo-Saxon invaders, the others were the remains of Britons or the offspring of mixed marriages. In other words, it appears that far from wiping out the ancient population, the Anglo-Saxon invaders settled alongside them, and even interbred with them.

As for the “Celts” retreating to edge of Britain, a 2015 study also hinted that this might not be true. The study, which analyzed the DNA of over 2,000 individuals whose grandparents also lived in close proximity, discovered that, while the populations of Wales, Cornwall, Scotland and Northern Ireland are different from those of England, they do not represent a shared ancestry. In fact, the population of Cornwall is genetically closer to the population of England than it is to the population of Wales and Scotland. In other words, the idea of a single Celtic population distinct from the English isn’t true.

Of course, the traditional histories of nations reflect the periods in which they were written. The idea of a Celtic culture developed in the nineteenth century, when the populations of Ireland, Wales and Scotland were fighting off English domination. Faced with the near extinction of their language and culture, people in the “Celtic” nations looked back to history to build their own separate — non-English — identities. They pieced together scraps of written evidence and beautiful Celtic-style artwork found throughout Britain to build an image of a pre-Anglo-Saxon society connected to the powerful Celtic civilization in continental Europe.

The English also, buoyed by the global power and reach of the British Empire, looked back in history to justify their own supposed exceptionalism. They found it in the idea that the Anglo-Saxons were a unique race of conquerors, somehow specially adapted for democratic ideals and liberty.

It’s thanks to developments in DNA analysis that we can move beyond such myths toward an accurate portrayal of history.

So, genetic history can tell us what didn’t happen, but can it shed any light on what did?

According to a recent study on ancient remains across Europe, the Beakers replaced around 90 percent of the British and Irish population in just a few centuries. How the Beaker People took over, no one really knows. Various theories have emerged: some suggest a violent takeover, others that the original farmers died out due to plague or climate change. Whatever happened, modern British and Irish DNA is largely derived from the genes of the Beaker Folk.

As well as their beakers (yes, they really are named after their favorite cups), the Beaker People are also probably responsible for bringing fair hair and pale complexions to the islands, as this study on Irish Bronze age farmers discovered.

Whether it be the color of the earliest Briton’s skin or the Ukrainian ancestry of the modern-day population, DNA analysis is overturning long-held historical beliefs. Who knows what else we might discover in the future? 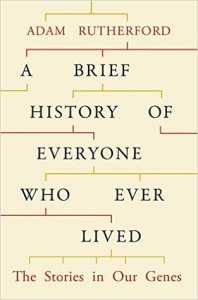 A Brief History of Everyone Who Ever Lived

A Brief History of Everyone Who Ever Lived