VIDEO: NASA, Your Smartphone and The Future of The Mind

Already on board to be a cyborg? This book is essential reading for anyone interested in the ultimate next step in self-optimization.

In 1965, Gordon Moore wrote a paper predicting that the processing power of computers would double every two years. This was just four years before NASA landed Neil Armstrong and Buzz Aldrin on the moon — Michael Collins remained onboard the command module to hold the orbiting fort. Because Moore’s prediction was so accurate, remaining true until just last year, the smartphone in your pocket now has more computing power than all of NASA did in 1969.

These technological forward-leaps have not only allowed humanity to strike out towards the stars, but have also enabled us to better understand our inner worlds. The human brain is considered to be the most complex object in the known universe, containing as many neurons as there are stars in the Milky Way. And science is just beginning to unlock its capacities. 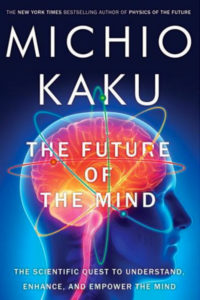 Michio Kaku’s bestseller, The Future of the Mind is an essential read if you’re interested in how the human brain evolved into today’s advanced model, how the technologies we use to understand it (and manipulate it) have developed, and how they open the doors for the next stages of human progress. Already, what not long ago would have sounded like science fiction is well on its way to becoming science fact. Work is underway on rudimentary telepathic and telekinetic technologies which have exciting applications for people with prostheses, paralysis, or chronic physical disabilities. Not only that, Kaku believes that the next step in human advancement will be to pimp our brains.

It’s not hard to imagine a not-too-distant future in which neural augmentation is a normal part of life. In the last half-century alone, people have gone all-in on technology as a means of optimizing their work, nutrition, exercise, sleep, you-name-it. If you’re already on the techie bandwagon, Kaku’s book is a thrilling read, essential for anyone interested in getting better at being themselves, and how the human race may start to take control of their own evolution.

The Blinkist app allows you to get the key insights from bestselling non-fiction books in 15 minutes or less. With over 2,000 titles centred on self-optimization and personal growth, there’s no limit to what you can learn with the app. It also has an audio function so you can listen to key ideas from books when you’re on-the-go. Download the app now: the future of your mind, the universe, and everything awaits!