VIDEO: Does Facebook Know You Better Than Your Spouse?

How much do social media networks know about you? Will AI oust the fallible human mind? We look at these ideas and more from Yuval Noah Harari’s Homo Deus.

As a species, us humans tend to pat ourselves on the back a lot for being the most complex creatures on the planet, the naturally dominant animals. And while it’s true that our innate curiosity has enabled us to progress at an unprecedented speed, it’s not always clear if that’s been a good thing. What’s the logical conclusion of that constant thirst for the next best thing?

It’s not a stretch of the imagination to think that in many spheres, people will soon be replaced by algorithms. But it’s not robots and AI in the traditional sci-fi sense that we should really be worrying about. The driverless car is a very real threat to one of the most commonly held jobs in the US: truck-driving. While the impact of this is a real concern for millions of people, there’s a solid argument to be made that the real danger of AI is in the information that we willingly volunteer to it.

In 2015, researchers conducted a study on Facebook which showed that based on 300 ‘likes’, an algorithm could predict a person’s answers to a personality questionnaire better than their own spouse. Think you know more about your significant other than Zuck? Don’t count on it. 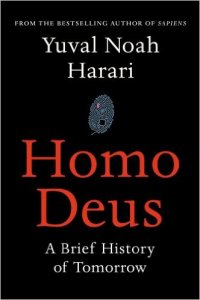 If the interplay of humanity and technology is something that captures your interest, you should absolutely dig in to Yuval Noah Harari’s latest book, Homo Deus. It’s a trove of crystalline ideas about how we got to be where we are, and where we might be headed in the future. If it leaves you wanting more, his previous book Sapiens was (and is) a wildly popular and enlightening read about how our species claimed global primacy. In Homo Deus, he asks whether or not we can maintain that reign.

The Blinkist app allows you to get the key insights from bestselling non-fiction books in 15 minutes or less. With over 2,000 titles centred on self-optimization and personal growth, there’s no limit to what you can learn with the app. It also has an audio function so you can listen to key ideas from books when you’re on-the-go. Download the app now to learn all about what the future might have in store for us Homo Sapiens.