As J.D. Vance’s memoir arrives on the small screen, the author’s portrayal of life in Appalachia again comes under fire.

In case you haven’t logged into Netflix recently, the streaming service is currently promoting its new dramatization of J.D. Vance’s 2016 bestseller, Hillbilly Elegy: A Memoir of a Family and Culture in Crisis. The book details the author’s experience growing up in an impoverished Ohio community, and it reveals how he managed to transcend his dysfunctional family’s troubles and achieve success as a Silicon Valley entrepreneur. 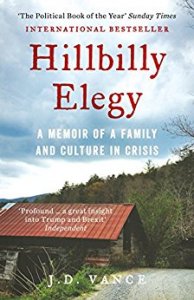 The film, directed by Ron Howard (Apollo 13, A Beautiful Mind), stars Amy Adams as Vance’s drug-addled mother and Glenn Close as his gun-toting grandmother. Actors Owen Aszalos and Gabriel Basso respectively portray Vance during adolescence and adulthood. Early reviews for the movie are a bit mixed — to put it kindly — but that hasn’t stopped Oscar buzz from swirling around both Adams and Close.

Hillbilly Elegy topped the New York Times’ bestseller list in August 2016, two months after its release, and now that Vance’s story is back in the spotlight, we figured it’s a good time to revisit some of the book’s primary themes and the controversy surrounding the author’s attitude toward Appalachia.

Vance grew up in Middletown, Ohio, a small city in the rustbelt region of Appalachia — a massive swath of mountainous land that stretches from southwestern New York to northeastern Mississippi. Residents of the area have long identified themselves as “hillbillies,” including Vance’s maternal grandparents. They moved to Ohio from Kentucky in the 1950s, after Vance’s grandmother became pregnant at age 13. Vance’s grandfather eventually found work at a local steel company, where he earned a decent salary that allowed him to buy a home and raise a family. But as the years went by, opportunities for middle-class workers began to dwindle. And by the time Vance was born, the term “hillbilly” had evolved into a pejorative that many outsiders considered synonymous with being poor and uneducated.

Through the years, in the wake of increased outsourcing, corporate globalization, and technological advancements, many Appalachian communities, including Middletown, have become overwhelmingly impoverished. For instance, the steel company where Vance’s grandfather once worked still exists, but machines have replaced many of the positions that were once performed by people. To make matters worse, the cost of living has risen faster than local wages, leaving middle-class families more likely to fall into debt. As a result, families that planted roots in the community decades ago have been left with nowhere to go, and the declining value of their homes has trapped them in neighborhoods that have become increasingly poor.

Throughout Vance’s adolescence, his mother struggled with substance abuse and addiction, specifically to OxyContin and heroin. Unsurprisingly, these issues wreaked an immense amount of havoc on Vance’s home life, and they ultimately led to his mother’s arrest following a failed attempt at a murder-suicide involving her son. The situation got even worse, however, when the author’s grandfather died, sending his mother into an accelerated downward spiral that ultimately drove Vance to move in with his grandmother.

The issues of addiction that afflicted Vance’s mother mirror the rise of the opioid epidemic in America. OxyContin hit the market in 1996, and the epidemic is often considered to have started in Ohio, Kentucky, and West Virginia. Even in 2017, Ohio led the nation in deaths from drug overdoses. And the fact that Vance’s mom worked as a nurse during this time and had unfettered access to her patients’ pills only exacerbated the situation. Ultimately, however, Vance was able to make peace with his mother once he learned to understand the forces that fueled her addiction.

While Vance was growing up, his grandfather helped him with math homework, and his mother provided him with an abundance of books. But as the author endured wave after wave of family fights, money troubles, and short-lived father figures, his education was relegated to the back-burner and his performance in school suffered substantially. But just as Vance was on the verge of dropping out of high school, he moved in with his grandmother (whom he called Mamaw) and remained with her for three years. Thanks to Mamaw’s strict rules and commitment to education, Vance stayed in school, aced his SATs, and joined the Marines upon graduation. Then, in 2007, he began attending Ohio State University and later enrolled in Yale University to study law. To this day, he credits his time with his grandmother as saving his life.

Vance’s story is compelling, but it’s far from typical compared to other people who grew up in Appalachia. Public schools in the area have fallen into a state of such disrepair that the local government has had to seize control of them. And due to the lack of educational options in the many parts of Appalachia, local parents have been left with no alternatives other than to enroll their children in high schools that hardly send any students to colleges or universities.

Upon its release, Hillbilly Elegy garnered praise from critics who lacked familiarity with life in Appalachia, but people who knew the area well found numerous problems with the book. Indeed, if you search for it online now, you’re likely to find as many articles lauding the memoir as you will condemning it. And the controversy has even inspired backlash from other authors, who’ve penned essays and books in defense of hillbillies and the Appalachian way of life.

Specifically, Vance’s critics claim the author reinforces negative stereotypes in his book, and he gives a false impression of what hillbillies are actually like. They argue that he paints with a broad brush — implying his individual experience is common to all people from Appalachia. The book’s detractors also denounce Vance for claiming that because he found the American Dream, everyone in the region should be expected to do the same.

In addition, critics also call Vance out for overlooking the cultural diversity of Appalachia, suggesting that the region is not a place, but a problem, and claiming that people in the area are suffering simply because they don’t know any better. Others take issue with the title itself, claiming that the use of the word “elegy” — which is defined as a lament for the dead — is offensive to the people who call this area home. In their opinion, the culture of Appalachia is not one in crisis but one that should be celebrated.

Furthermore, toward the end of the book, Vance (a vocal Republican but an occasional critic of the party) credits the hillbillies of Appalachia with helping to elect Donald Trump. Vance makes the argument that people in the region voted for Trump because they are ill-informed about politics, but he fails to mention factors such as voter suppression or limited internet access in the area.

To learn more about Vance and his journey — or to decide for yourself if the criticism about the book is justified — use the Blinkist app to explore the key takeaways from Hillbilly Elegy today. Then check out the new Netflix movie and make up your own mind.