The Stupid Loop: Why Your Stupid Idea Could Become The Next Big Thing

Next time a friend labels your idea as stupid, don’t be so quick to listen! Your “stupidest” idea might also be your most genius.

Your “stupidest” idea might also be your most genius. If someone writes you off, remember these tips from Richie Norton’s book The Power of Starting Something Stupid.

Think back to that one time you had an amazing idea and couldn’t wait to spill the details to your friends. When you finally did it, their reactions were…not what you’d hoped for. Just as quickly as you formulated your brilliant plan, they shot it down and crushed it into a million tiny pieces.

Here’s the truth: you shouldn’t take their opinions to heart. Why? Because some of the world’s leading innovations and companies have begun from a seemingly stupid idea. 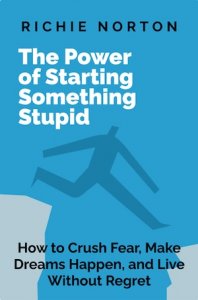 The Power of Starting Something Stupid

The Power of Starting Something Stupid

The Power of Starting Something Stupid by Richie Norton shows that people – your friends and family included – often shoot down ideas because of doubt, fear, confusion, or general lack of understanding.

When founder of Doggles, Veronica DiLullo, created her fashion eyewear company for dogs during an economic recession, do you think she wasn’t hounded by her fair share of doubters and naysayers? Highly unlikely. But she didn’t listen to them, and it paid off bigtime. Her company made $3 million within one year.

Even something as monumental and important as the telephone was originally denied. Western Union said in an 1876 memo, “The device is inherently of no value to us.” If only those same people could see how their rejected idea changed the world!

But let’s be realistic. There’s a difference between ideas that are plain dumb, and ones that are simply labeled as such. But how can you tell? You might want to keep these two tricks in mind.

It’s not easy to plow through rejection. Since there’s no step-by-step guide to tell you when to move forward with an idea, you have to trust that feeling deep in your gut. If you’re strongly convinced of something, then who’s to tell you it’s not worth any time? The former CEO of General Electric, Jack Welch, once said about worthwhile ideas: “You know it when you feel it.”

When your instincts all point plainly in the direction of GO, then don’t look back and stick by your goals. If it helps, you can relabel your stupid idea as the new smart – because why not?

Change is happening all around us, so our own big ideas have to keep up. Innovation means challenging the status quo and constantly questioning our environments. You might try, then, to see your ideas through what Norton calls the stupid loop. Here’s his rationale:

Many successful innovations come from “stupid” ideas, which end up becoming the new standard in society. In order to challenge current standards and continue that flow of innovation, you must come up with more stupid ideas. You automatically limit yourself by failing to reassess the status quo.

It may sound a little silly, but the logic is there. Your stupid idea could really change lives, and maybe even earn you a few bucks in the process.

Pick up a copy of The Power of Starting Something Stupid by Richie Norton to find out more compelling reasons why you shouldn’t scrap that stupid idea.