The Future of Medicine

Next month marks 15 years since the completion of the Human Genome Project, an international effort to map—or sequence—the 3.2 billion pairs of nucleotides that make up our DNA and determine how they each affect our physiology. This ambitious undertaking lasted 13 years, cost more than $2 billion, and involved 20 teams of scientists from half a dozen countries. And while the project undoubtedly succeeded in forming the foundation of modern genomics, the high cost of personal gene sequencing has thus far prevented most of the population from reaping the rewards of the groundbreaking research. Fortunately, though, there’s some fantastic news on the horizon.

This past January, a team of researchers announced that they used a pocket-sized, $1,000 device to successfully sequence a human genome more completely and more rapidly than any other single technology in history. Compare this to the multi-million dollar price tag associated with genome sequencing in 2004, or even the $1,500 it cost in 2014, and it’s quite possible that decoding your DNA could be as affordable as $100 by 2020. And although many professionals in the medical industry thought it would take far longer before such a breakthrough occurred, cardiologist and geneticist Dr. Eric Topol knew this day would arrive sooner rather than later.

It’s important to note that while companies such as 23andMe and AncestryDNA have offered personal genotyping services for years, gene sequencing differs from genotyping in that it delivers a comprehensive look at an individual’s entire genetic composition, rather than simply determining which genetic variants a person possesses.

In his 2015 book, The Patient Will See You Now: The Future of Medicine Is in Your Hands, Dr. Topol predicts the rise of personal gene sequencing and argues that the data gleaned from mass adoption of this technology could revolutionize the way the medical industry works. Here’s a quick look at a few of the top takeaways from this title. 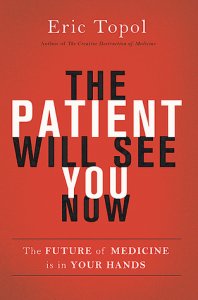 The Patient Will See You Now

The Patient Will See You Now

Our beloved digital devices already allow for unprecedented access to medical information, and they enable us to connect with virtual health-care services at any time of day, but soon our pocketable screens will also empower us to test ourselves for ailments and diagnose our own diseases. Cameras on future phones will eventually be capable of scanning for microscopic bacteria, and accessories such as smartphone-friendly glucose monitors will make it easier for individuals to keep an eye on their health anytime and anywhere.

The invention of a human GIS will change healthcare forever.

While numerous industries across several fields of science and engineering have already adopted a geographic information system, or GIS, to visualize various layers of data in one view, such an interface has yet to emerge insofar as the human body is concerned. But Topol foresees the advent of a “Google Maps for humans” that allows for the superimposition of physiological stats (e.g. a heart rate), genetic traits (i.e. details about DNA), and anatomical info (such as bone density) all on a single screen. In his estimation, having access to this type of technology would lead to a new world of medicinal treatments.

As initiatives such as All of Us, the Health eHeart Study, and the Google-backed Project Baseline continue to collect, organize, and analyze medical records from millions of volunteers, researchers will increasingly be able to identify health-related insights and trends hidden in such “Big Data.” At the very least, this deluge of data could help scientists predict and prevent chronic illness, slashing the $3 trillion Americans currently spend on healthcare, though ideally, algorithms will predict future outbreaks, helping humanity remove them entirely.

It’s clear that, in the years to come, patients will gain more power as technology grants us increased access to our own biological information. If you’d like to learn more about Dr. Topol’s predictions for the future of medicine, explore the key insights to The Patient Will See You Now, or immerse yourself in any of the myriad science- and medicine-related titles in our library.