The Secret To Financial Freedom According To Billionaires

Navigating the investment waters can be tricky, but who’s better to give you advice than a bunch of billionaires?
Here’s their top tip.

Earning, saving, and investing money while still maintaining a high quality of life and enjoying the fruits of your labor in the process is a kind of peaceful balance many want to master. It also happens to be one of the most elusive, seemingly requiring a fine-tuned combination of work ethic, finesse, good judgment and luck. 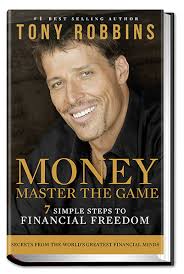 At some point, you’ve probably wondered how billionaires manage their money along their paths to success. In MONEY Master the Game by Tony Robbins, we learn about the surprising financial advice billionaires would leave to their children if they couldn’t leave them money.

Turns out, most of these successful people agreed on a concept that seems almost too simple: when investing money, don’t sell. Sit tight, do nothing, and let the power of compounding work its magic.

Compounding. Learn it, live it, love it.

The idea of compounding is so huge that Albert Einstein once called it the most important invention in all of human history.

What it is: Your money grows by X percent each year, but at the start of each year you can add last year’s interest to the mix – making your gains larger as time goes on.
Why it’s important: Most of us have grown up with the healthy notion that we need to work hard for our money – and for the good majority, it feels good to earn. But compounding also allows you to make money while you sleep, and it’s no coincidence that many high performers and rich people call this the key to financial freedom.
Compounding in action: When Benjamin Franklin died in 1790, he left $1,000 to Boston and Philadelphia to be invested. 100 years later, half a million was withdrawn from the stash and the rest left untouched for another 100 years. In 1990 – two centuries later – ol’ Ben’s contribution had transformed into a cool $6.5 million.
How you can start using it now: Begin by talking with a professional, unbiased fiduciary to help you invest. Start thinking about the ways in which you can utilize compounding to move from a world in which you work for money, to one in which money works for you.

Make sure to check out MONEY Master the Game, where Tony Robbins spills a bunch of other interesting secrets about that little thing that makes the world go ‘round. You can also read the blinks (that’s a 12-minute summary) on Blinkist.