It’s International Talk Like A Pirate Day! We spoke to Sam Conniff Allende, author of Be More Pirate about why that means more than shivering your timbers.

Sam Conniff Allende has been taking the UK by storm — he literally stormed his own publishing house — since May. Come January, he will be setting his sights on the US. His book, Be More Pirate, encourages people to take inspiration from the world’s great rulebreakers, and to stand up for what matters in a world full of systems that clearly no longer fit their purpose.

We caught up with the author a little while ago to chat about how it’s all going.

Why do you think you were compelled to write Be More Pirate? How much were you affected by the times we live in?

So, yes I think I tapped into the zeitgeist and the trends that I’ve seen coming for a long, long time. I started writing in 2016, so just ahead of Trump’s inauguration. That was in November and Brexit was that summer so a huge sea change [occurred]. 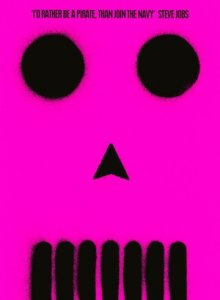 At another level, there was a real ego thing going on. I’m heading towards the age this year that my dad was when he died and my little girl will be the same age that I was. My professional career has followed the same path as his in many ways and I also knew I was going to be leaving Livity. There is a real legacy thing, and there’s ego tied up in books anyway. I mean certainly in my world and genre. It would be daft to try and deny that. It’s an attempt to leave your name etched into the great armchair of existence, isn’t it?

What do you consider that legacy to be?

I like the idea of a rebellion race. I’m surprised and proud and pleased that this tiny little bundle of paper is possibly more powerful than trying to build businesses with a social purpose and that’s because it’s such a different model. You give away your idea to somebody else and so I like the idea of a return on the rebellion.

Is that what success looks like for Be More Pirate?

If books can build movements then probably if people were measuring their success on how many units sold then they’re not really measuring the right thing. If sharing ideas is what we’re trying to do then the role of something like Blinkist becomes really important. The volumes that we achieve together become significant. The number that people download, [the number of books] sitting on people’s phones. The most powerful idea on the most powerful device.

If we’re talking about the accessibility of ideas, is there a danger that a book like this might only impact an already pretty privileged community?

Coming out the end of nearly 20 years of having quite a benevolent career, and that’s not to do a disservice to some of the good stuff that we’ve done, but I can’t overlook my own part in the institution as well. Actually I think that’s why I was so dedicated to testing it [Be More Pirate] and testing it and testing it. And the areas I thought it was going to land the least in it landed best in. So running [workshops] in townships in South Africa, in Baltimore, and Detroit, I thought was going to be laughed out of town, thinking that my ideas were running far too much through my own filter. But I’m so glad I did because that’s certainly where it’s strengthened more than anywhere else.

I’ve tried to take it to the guys who are on the frontline trying to create change, and it was as potent as it is anywhere else. I worked on the material in those places where the change has got to come from the ground. It’s been through the hardest critics — those on their own, feeling unsupported, without necessarily all the privileges that help you create change. If they believe in it, then there is something there.

You’ve used a lot of classic activist tactics in order to promote your book. Is there a danger in that?

I have an awareness of that because I’m totally aware of appropriation, whether that be cultural or political, and I come into that, I think, hopefully with an appropriate level of good humor and respect. But each time I’ve been surprised at how well it’s been received by a person that I would worry might see me as just using it for promotion. So I’m pleasantly surprised each time, which is good. I’m trying to tune into the right level of frequency and the impact that it can have.

You’re encouraging people to break rules and ‘be more pirate’ but how do you feel about content piracy? What if your entire book was available to download for free?

Oh, I’d champion it! [Content piracy is] not a black and white issue, is it? I mean it’s usually there for a reason. The first people to get really upset about digital content piracy was the music industry, and it was simply because they were lazy. They responded to digital technology and the ability to download MP3s with CDs, and then they tried to flog MiniDiscs to us and they did exactly the same thing with back catalogs. It was a redundant technology. Pirate Bay and Limewire etc. did a massive service for the individual. Content creators need to look into new ways and new revenue streams.

If we want to ask some questions, we want to ask some questions of Spotify and YouTube and Apple Music, that’s where there’s some of the wrong piracy going on. If you’re going to argue that on one hand music piracy is bad because creators lose out, but Spotify is okay because investors get their return, then… If the authentic starting point of the argument is ‘well what’s left for the creator?’ then piracy isn’t necessarily the worst thing that can happen.

The startup industry prides itself on this idea of changing the world for the better, but surely the current system needs some disruption, some piracy?

I think it’s that classic thing. You can think of millions of inspiring startups of the last generation and those that are a success are happy to very quickly become part of the institution. It’s bringing disruption to the previous generation that allows you to create your space, and very quickly you need to protect your space and get your return. I think that’s sometimes the nature of life. We all pay taxes and turn into Tories!

[I like] the notion of piracy because there’s an honesty to it. They either got killed, or made their money and buggered off. Piracy pushes you towards redundancy. Anybody who is setting out to change something has to work out where they draw the line between redundancy and success. When you change the thing you set out to change, then what does the role of you become?

So what’s the goal after the US version is released?

I have a picture in my head, and it’s a guy that I’ve seen, sometimes a guy, sometimes a girl. I see them in coffee shops when I’m working. I’m stealing half an hour between meetings and I always wonder what the fuck they do, because they have a nice latte on the go, they’re reading The Economist, they might send the occasional email but they are not stuck to their phones, and then they saunter off down the street. I want to chase them down and ask, hey you’re not really stressed, so what is it that you’re doing? I idealize that once this book is out I get to shift, because I was 22 when I started and now I’m 42, so it’s been 20 years at that pace. But can I go through the gear shift to work at a different pace? Not spending most of my life in my mind thinking about what will come next with the next business? No responsibility, no team, no rents, no debt. What’s in that space?

Well, here’s wishing Sam lots of coffee shops and lazy afternoons. You can check out the key insights of Be More Pirate on Blinkist now. Find out more at bemorepirate.com