Caste Out: Exploring The Road to Change With Oprah’s Latest Book Club Pick

In Caste, Isabel Wilkerson investigates how class and hierarchy are intertwined in the way that race, and racism, play out in the United States.

The focus on the Black Lives Matter movement and the international debate it has created around racial inequality and violence remains an integral part of the global conversation. Over fifty years after the victories of the Civil Rights movement, there are many signs that the United States is still a long way from bridging the gap of racial inequality. Lasting change seems as far away as ever.

Oprah Winfrey’s latest Book Club pick, Isabel Wilkerson’s Caste, was published in August this year, and has been met with almost unanimous critical acclaim. Not only for its timeliness, but for the powerful social history that unravels in Wilkerson’s narrative.

While the public conversation remains focused on systemic racism as the fundamental problem and mode of oppression, in Caste, Wilkerson looks at American history in a way that explains the mechanisms behind its endurance; how systemic oppression based on race inconspicuously becomes ingrained into a culture, and how this engenders the generations of social hierarchy that make such a system seemingly impossible to dismantle. 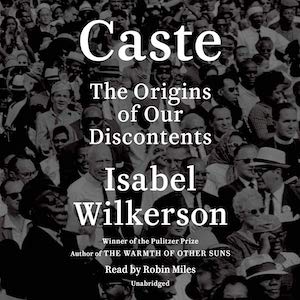 The word “generations” is key to understanding the predicament Americans find themselves in, because the longer structural problems persist, the harder they are to fix. The country has a history that spans 300 years, and it is still suffering fractures, political and otherwise, that divide it to its very core, such as mounting economic disparity, and unequal access to education and healthcare. The disproportionate way in which its African-American population continues to be subjected to these disadvantages makes this enduring tragedy seem deliberate.

How Race and Caste Became Synonyms

To address the question of why the inequality of suffering and systematic disadvantages are so resistant to change, Isabel Wilkerson takes a look at things from the perspective of caste. Caste is a system of social hierarchy in which people enjoy varying degrees of superiority or are subjugated based on the caste to which they belong. In the case of the United States, the caste system is based on race, and is most visibly exercised through racism.

‘Race’ as a concept that is used to differentiate and categorize people emerged at the outset of the transatlantic slave trade. It was used by European colonists in the context of encountering native peoples, as a means to exclude them, and as an ideological tool upon which to base a social hierarchy that, unlike one based on class, cannot be transcended.

The Architecture of Oppression

Systems of oppression are based on attitudes and behaviors which are disseminated throughout societies without being questioned. They are able to spread unrestrained because they tend to be perpetuated over generations, mostly non-verbally, in the early stages of human development.

Caste systems survive, and thrive, because they are built on a set of 8 foundational pillars. These include a process of dehumanization, systematic oppression and violence. They are upheld by centuries because those in upper castes are made to feel that they will lose their privileged standing in society if the systems that subjugate lower castes are not kept in place.

1. Divine Will and the Laws of Nature

The first pillar is based on the notion that the hierarchy of castes is determined by the will of a higher religious power. In India, for example, the social order was derived from Hindu texts who placed different social groups on top of the other in the social pyramid. In the US, the biblical story of Noah and Canaan, served as a basis to uphold the race-based caste system.

The second pillar of the caste system dictates that one is born into the caste of his or her parents. Colonists in America went as far as introducing a strange innovation into their patriarchal world to ensure that the children of slave masters and slaves would never rise above their assigned caste: They made the mother’s status the factor that dictated the child’s caste.

3. Endogamy and the Control of Marriage and Mating

Endogamy refers to marriage and mating only within one’s own caste. Failure to adhere to this rule has severe consequences in caste societies such as India, and it has been brutally enforced throughout American history as well.

White supremacists and other racists groups often talk about keeping bloodlines pure, and their concept of purity (vs. pollution by the presence of a lower caste) applies to all of nature—during the Third Reich, Jewish people were forbidden to set foot on a beach. In America, if a Black person was known to have been in a pool, it would have to be drained and cleaned before it was deemed ready for a white person.

You may have heard the argument that someone has to do all the menial jobs for a society to function. On the US senate floor in 1858, James Henry Hammond of South Carolina made this argument, stating that the Black “race” had the kind of “vigor, docility, [and] fidelity” required to perform “the drudgery of life.”

This is a foundational part of the caste system, but it is an enormous undertaking, as it goes against what we should know in our hearts to be true: that we are all human beings—each no better or worse than the next. The tactic relies on dehumanizing entire groups of people, instead of individuals. This is what the Nazis did to the Jewish community, and it’s what the US has done to African-Americans

7. Terror as Enforcement and Cruelty as Means of Control

Whippings, hangings, and burnings were tools of enforcement and control that were used by both the Nazis and American slave masters. In both Nazi concentration camps and Southern plantations, these whippings took place in full view of everyone else in the low caste. It was both punishment and warning to those that defied their place in the caste system.

The last pillar refers to the often-unspoken code that permeates every interaction between the dominant and lower castes, consisting of behaviors and dress codes that are intended to reflect the lower caste’s inferiority. This pillar is often the one that becomes ingrained into society’s subconscious and causes lasting damage.

The Roads That Lead to Freedom

In Caste, Isabel Wilkerson investigates how class and hierarchy are intertwined in the way that race, and racism, play out in the United States. The book is both an investigation into how inequality has been slowly built into the fabric of American society and its institutions, and a revealing look into the similarities it bears to caste systems in other countries and regimes of the past and the present.

The ideas in Caste, which is Isabel Wilkerson’s second book, work together with the ones outlined in her award-winning first book from 2010, The Warmth of Other Suns: The Epic Story of America’s Great Migration. You can get the key ideas of both, and those of thousands of other brilliant nonfiction books, with the Blinkist app. 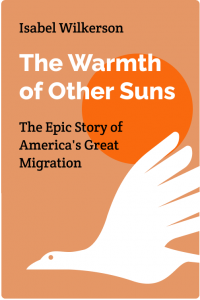 The Warmth of Other Suns

The Warmth of Other Suns

In many ways, the ideas in Caste sprang from the deep research Wilkerson did in looking at the northward migration of millions of African-Americans from 1916 to 1970. It’s a vital part of American history, and one that continues to play an important role in American society.

In The Warmth of Other Suns, Wilkerson writes about this seminal event through personal stories that reveal why so many people abandoned the South, and what it was like for them on the other side of the Mason-Dixon line.

It is estimated that six million Black Americans fled the American South to start life anew in the North. This was the biggest, most significant instance of mass migration within the borders of the United States. Not only did it affect almost every Black American, but it changed the face of the country.

Even though the Jim Crow Laws were the catalyst that sparked this movement, most Black Americans who took a chance at a new life up North, did so to escape the life imposed on them for being second-class citizens in a caste system: the constant threat of violence, oppression, and the certainty of an inescapably grim future.