Spying on Yourself: How Real Life Provides Creative Material

We might not live the plot of a thriller, but being aware of yourself and what and who is around you can provide a solid basis for story and character.

At the height of the Cold War, a British spy’s identity is revealed to Russian intelligence. He retreats from his post before he can be caught. He is lucky. Others are not. Soon, it becomes clear that an official in the upper echelons of the UK’s espionage operation is passing off information to the Russians. A select group within MI6 begins to employ their trade against their own organization to uncover the traitor in their midst.

It all sounds like a compelling read, right? And, in fact, it is. John le Carré’s Tinker, Tailor, Soldier, Spy made the author a household name in the 1970s. The book has been adapted into a BBC miniseries and a feature film. It added the term “mole” as a synonym to a double-crossing agent into the popular lexicon and shaped our perception of the spy trade.

For le Carré, however, it was hardly just a work of fiction. 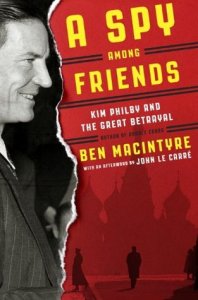 A Spy Among Friends

A Spy Among Friends

Ben Macintyre’s book A Spy Among Friends offers a look into the actual history of Kim Philby’s work as a Russian agent in MI6 that inspired le Carré’s novel. le Carré himself was one of the spies Philby outed.

And, in turning his experiences into a creative work, le Carré joined a line of storytellers who have heavily borrowed from their direct experiences.

However, such a heavy reliance on biography can also become a way to deflect constructive criticism. Creative works are already personal, for sure. By inextricably entangling ourselves with reportage, however, we risk sacrificing the needs of the story to the desires of the plot.

This isn’t to say you should format your internal hard drive before starting each new piece. Your experiences and memories are the 1’s and 0’s that end up compiled into your personal language. The trick—that is to say the result of much hard work and reflection and soliciting feedback and grit and not-giving-up-ness—is determining which of these phenomena are too personal for a broader audience to understand and which speak to a more fundamental level of shared human experience.

Emotions can be a starting point. We all experience joy and fear and anger and despair and ecstasy, plus the whole gamut of other mixtures that make up our personalities. The characters or phrases of music we write do not need to share the same specific objects or causes of these emotions with us. What matters more is that such emotional expression is present at all.

Your characters may, in fact, feel the exact opposite as you do about this, that, or the other, but in sussing out why that is, you open up the possibility for forming more backstory and new revelations about your own creations. What was once a one-note character becomes a sustained chord plus extensions.

All that material does not have to sit in the final edit of the story. Though through working out these details, we are better able to shape stories that resonate with the fundamental humanity of our audience.