How Your Personal Brand Might Be Killing Your Creativity

In this day and age, corporations are people and people are brands. But what if all this branding is snuffing out your true creative spark?

Being personally accessible to fans — and potential fans — is now part and parcel of creative work. Social media is as much about persona as product and that means many creative people end up spending as much time courting their fanbase as they do on creation.

While this was certainly true before the advent of social media, aspiring creatives now have to deal with praise, criticism, and public opinion, often long before they’ve found their voice. And this is a very dangerous thing for creative work indeed. In 1997, long before Twitter reared its head, David Bowie warned against “playing to the gallery”.

“Never work for other people in what you do. Always remember that the reason that you initially started working was that there was something inside yourself that you felt that if you could manifest in some way, you would understand more about yourself and how you co-exist with the rest of society. I think it’s terribly dangerous for an artist to fulfill other people’s expectations. I think they generally produce their worst work when they do that.” — David Bowie

Keeping an audience happy is the antithesis of personal creative satisfaction. Indeed, this feeling of responsibility towards an audience — real or imagined — is incredibly stifling and often puts people off creative work entirely.

In Srinivas Rao’s An Audience of One, we learn that simply being creative is itself its own reward. Ironically, once we forget about a perceived audience, our work becomes more engaging, original, and likely to attract a positive reception. Focusing on pleasing an audience of one (hint: that’s you!) will give your work a greater chance of resonating with people when you eventually feel ready to push it out into the world. 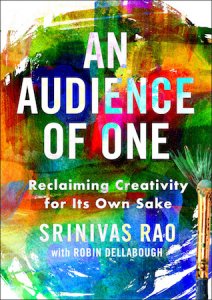 An Audience of One

An Audience of One

Rao tells us, as creatives we need to stop focusing on extrinsic motivators, i.e. those that come from outside the work itself like money or acclaim. An artist must remember that turning a vision into reality will bring the greatest sense of satisfaction, not what others say or think of it.

When the completion of an idea becomes the only goal, those extrinsic factors will naturally follow. And if they don’t, it won’t be so detrimental to the artist’s ego or sense of self-worth. After all, they met the original goal they set out to achieve which is by far the greatest reward there is.

Failure — and repeated failure — is a very normal part of the creative process. However, if we are too quick to get our work seen and appreciated by an audience before we have had a chance to fail, try again, and improve, criticism could very easily stunt a person’s desire to create.

In order to be creatively successful, Rao points us towards positive actions that aid the creative process rather than seek to showcase the work to an audience before it is ready.

Personal branding may not directly contradict these positive steps but it certainly doesn’t promote them. Most crucially, spending time on personal branding takes time and energy away from the work itself.

For any of us with creative dreams, Srinivas Rao’s inspirational book An Audience of One teaches us that it’s time to worry less about how our work will be received. As Rao so passionately argues, it’s the pursuit of the goal that should be the artist’s main concern and if we focus on that, the rest will follow.

If we allow ourselves to be sidetracked by a misguided desire to showcase our work before it’s ready we will find ourselves distracted and potentially deterred from pursuing our dream completely. If we stick to an audience of one, we only have ourselves to please.