Past Perfect, Future Tense: The Benefits (and Disadvantages) of Creative Traditions

Reboot culture is not a new phenomenon. As easy as it is to become stuck in the past, it also provides the springboard for moving forward.

Your favorite expanded universe has a new movie coming out. That TV show you kind of remember from your childhood is headed to the silver screen. Your favorite band from high school just announced a new album.

We look at the news and look at what feels to be an increasingly chaotic world then look to the past for comfort or rootedness or distraction. Such a tendency seems to characterize this first almost-quintile of the twenty-first century. The familiar, bound to the fixedness of the past, offers certainty and clarity, balms for the anxieties we feel about an unknown future. But, maybe it can also provide the foundation for exploring new ideas.

In the Western tradition, these resurgences are not a new pattern. During Napoleonic times, filled as they were with strife and uncertainty, artists latched onto the models offered by the ancient civilizations of Greece and Rome. Soon afterward, this Neoclassicism branched out into a more general Historicism. Neo-gothic and collegiate gothic buildings soon joined the Neoclassic, along with the Neo-renaissance and the Neo-baroque ones in the major cities of Europe and the US. Aristocrats even built fake ruins on their land.

The Art Deco period, arriving in the wake of World War I, was characterized by a number of “Revivals,” which took inspiration from Greek, Mayan, Asian, and Egyptian sources, as well as earlier European traditions. The Chrysler Building in New York, with its lancet-like lines and eagle gargoyles has a touch of the gothic about it.

This isn’t to say that the past holds no value. After all, one must start from somewhere. However, problems arise when our devotion to these earlier eras goes unquestioned, or when we enforce a loyalty to the past as a way to deflect the real issues of the present. Canons arise that define “true” art. Voices that fall outside a canon’s strict parameters become ostracized from the broader culture. Criteria such as class, religion, skin color, sexuality, and gender have all impacted who is allowed into the fold.

Such rigidity and stagnation over a long period of time can lead to cultural atrophy or unleashings of creative output. However, such creative eruptions can also carry up some darker elements.

The break from Historicism that created Art Nouveau and the various movements of Modernism at the turn of the twentieth century also led people to seek what made their country’s culture unique. Nationalistic sentiments developed in tandem with the new art forms and in some cases turned creative works aiming for a better future into propaganda for a supposed edenic past to which society was “meant” to return.

The current glut of films and television series featuring well-known characters may feel like a regression of sorts. With early superhero films like Batman Begins and Iron Man, it looked as though we would just be telling ourselves the same stories as before: classic Good vs. Evil, Rough-edged dude’s heart turns golden, etcetera. However, the evolution of these films shows us how much movement there can be within what seems to be a rigid frame.

Scott Berkun’s The Myths of Innovation mentions that people need to be given samples before they can be sold wholesale on an idea, kind of like a trip to Costco. By releasing films with the likes of Batman and Iron Man earlier on, studios could find out if audiences would be receptive to comic book films at all. Nowadays, just seeing that a film is made by Marvel is enough to bring millions of people to theaters, and multiple times at that. 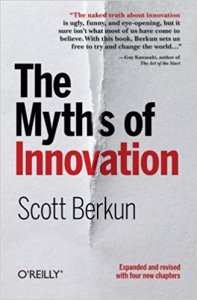 The Myths of Innovation

The Myths of Innovation

Films like Wonder Woman and Black Panther have opened up who can be considered a protagonist in these kinds of movies to include non-white and non-male people. Whereas we bought tickets to watch antiheroes in the mid-2000s and early 2010s, nowadays we seek out heroes who are not afraid of virtue for its own sake and also manage to be fun characters to spend a few hours with. What may have been seen as too great a risk early on now sells billions of dollars’ worth of tickets around the world.

We’ve also seen a similar story play out with the new Star Wars films that began with The Force Awakens. Despite what a handful of trolls might have you believe, people have been responding well to these diversified ensembles.

They serve as a classic case of what they teach in writing classes as “Show vs. Tell.” Whereas Man of Steel “told” its audience to break with the past, at times fairly explicitly, the film’s same-old same-old narrative undercut that part of the message. Films like Wonder Woman, Black Panther, the upcoming Captain Marvel, and many more coming down the pike, “show” us what these breaks from past conventions look like, whether that be in terms of protagonist, narrative, or other aspects.

These steps may seem small, but a step forward is a step in the right direction.