What do you do when you’ve already reached the peak of your profession? For F1 World Champion, Nico Rosberg, walking away was the only option.

When the world was in the midst of lockdown, the Blinkist team wanted to know how people were coping with a life lived remotely. We checked in with people we know and people we admire—often both—to see how they were managing their new circumstances. In one episode of Checking In, Caitlin — of Simplify podcast fame — spoke to former Formula 1 World Champion-turned-entrepreneur, Nico Rosberg, about the struggles of managing a team remotely and maintaining focus during extreme times. Here, we take another look at that interview and share some of his key thoughts.

Nico Rosberg is a man with many hats; the son of a Formula 1 champion who, in 2016, became a Formula 1 World Champion himself. A mere five days after clinching his maiden title, he walked away from the sport. Though he remains active in F1 as a coach and a television pundit, he had set his sights on something beyond competing.

When he claimed the world title, Nico had arrived at a point in his life where he not only wanted to devote his time to his young family, but to commit to a life of service for society at large. Rosberg’s fascination with engineering and innovation drove him to become an eco-entrepreneur, and he used his success and his celebrity to advance the field of green technologies.

Green Technologies Will Light the Future

Nico Rosberg found his new calling in a very familiar place. In the field of mobility, he found that “there’s huge disruption at the moment with electric cars, and autonomous cars, to help preserve the environment in a big way”. This inspired him to pursue projects with a direct, positive impact on environmental preservation.

Nico recently invested in an e-scooter company that provides free scooters to healthcare workers. He co-founded Greentech Festival, a green/sustainable consumer electronics show that, through trade and entertainment, aims to give a platform to emerging companies in the green technologies space, as well as to educate the general public about the vast potential that sustainable tech holds. With a whopping 40,000 participants in its first year, Greentech Festival is a prime example that public consciousness around issues of sustainability is growing, and taking center stage.

How To Keep Moving When Everything Stands Still

Since his retirement from racing, Nico has worked hard at advancing greentech to the point where it’s competitive in the mobility industry — beyond trade shows and investments. He built a large international team in his hometown of Monaco, to work directly at the company’s headquarters. However, once the pandemic reached the principality and #stayhome became the norm, Nico and his team were left to find ways to keep the momentum going.

During the pandemic, Rosberg’s workforce returned to their home countries, and adapted to a fully-remote working setup. Nico was pleasantly surprised to discover that overall productivity went up, as well as a growing sense of mutual responsibility: People started being early to meetings, preparing thoroughly, and staying focused for longer. They became faster and more efficient.

However, he and his team started to hit a slump as they went without physically interacting with each other for an extended period of time. Be it going for lunch together, playing soccer, or simply hanging out after work – they were not able to do the activities that kept the team together as a group. On a social and personal level, Nico wondered: How do we keep our spirits up and support each other, while being so far away?

If there is one thing that Nico Rosberg learned in his former life as a Formula 1 world champion, was the ability to make decisions under pressure, and do it fast. Often, career-defining moments, such as his Malaysia Grand Prix win in 2009, or his emotional home victory in Monte Carlo in 2015, were entirely contingent on fast decision-making. And he has swiftly taken this skill onto his new life.

He says that in business meetings, “there tends to be a lot of talk about plans”. However, when it comes to implementation, things become really slow. Rosberg noticed this straight away, and decided to go the opposite way — for him, responses are immediate. He goes from talking to defining and tackling action points in a heartbeat. His motto: “Great talk; now, let’s go for the action.”

It Takes Resilience to Stay on Track

As big a fan of walking the walk as he might be, Nico Rosberg is only human after all. Intrinsic motivation is powerful, but not endless; sometimes, we need novelty as a way to stay on track, and to be resilient.

Rosberg realized that, in order to keep himself moving forward, he needed to consistently find and pursue new challenges. He also realized that he could use this impulse to inspire others to become better versions of themselves.

Nico took to social media and started the #oneaweek challenge; a weekly series documenting his life as he tried his hand at different personal development practices for seven days, in order to build good habits that would, in turn, nurture his life and the lives of his 1.5 million Instagram followers. From healthy eating to meditation and reading, the #oneaweek challenge succeeded in inspiring people all around the world to make progress on things they always wanted to do, but never got around to doing.

More importantly, this fascinating social media initiative serves as proof that everyone can take Nico’s stance and do everything at their disposal to effect positive change in the world. Being a leader and a positive influence is not reserved to world champions.

The reception to Nico Rosberg’s weekly challenges has been tremendous. Social media users all around the world have joined the movement, and took one of the challenges particularly seriously: the reading challenge. The premise is simple: ‘read that inspiring book that you’ve wanted to read since forever’.

Nico read A New Earth by Eckhart Tolle. He found he was particularly interested in the psychological and philosophical angle of the book on mental wellbeing. According to Tolle, the gateway to better mental health and wellbeing is mindfulness, as well as developing a consciousness of our anxieties, our fears, and our negative emotions, instead of just living them and letting them go unchecked. 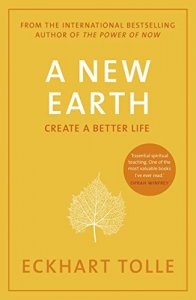 Rosberg is an avid reader, and took the overwhelmingly positive response to his reading challenge to heart. He says that “Book reading is so damn valuable”, and we could not agree more. Reading is one of the fundamental elements of mental health and wellbeing. If you’d like to read more in less time, why not take a leaf out of Rosberg’s book and check out the Blinks to A New Earth on Blinkist.