We Have Liftoff! A Giant Leap for Elon Musk

There’s a crash-test dummy in a red Tesla currently hurtling its way into space. What else is Elon Musk planning, and what might it mean for the rest of us?

SpaceX’s Falcon Heavy, one of the world’s most powerful rockets to date, just made space exploration history. At 3.45 p.m. ET on February 6th, as SpaceX employees at the Kennedy Space Center in Florida watched with nervous excitement, the rocket launched successfully. Even more impressively, two of its three first-stage rocket boosters were guided safely back to Earth, something that’s never been achieved before. Elon Musk, entrepreneur extraordinaire and founder of SpaceX, said shortly after the event, “That was probably the most exciting thing I’ve ever seen — literally ever”.

The rocket, which boasts a thrust equal to 18 Boeing 747 jetliners and is now making its way into outer space has no human passengers onboard. Instead, it carries Musk’s very own cherry-red Tesla roadster with a space-suit-clad dummy in the driver’s seat, fittingly named “Starman”. Musk’s plan is to put the car into orbit around the sun.

SpaceX, however, has greater plans for its groundbreaking rocket than hurling unsuspecting cars into space. With the Falcon Heavy, the company has demonstrated once again that it can not only launch rockets successfully into space, but do it for a fraction of the cost of its competitors. By carrying satellites, other payloads and, eventually, humans, into space at ever lower costs, SpaceX is set to disrupt the space industry. Three large telecommunication satellites are already scheduled to be launched into orbit by the Falcon Heavy and the U.S. Air Force is also planning to use it. 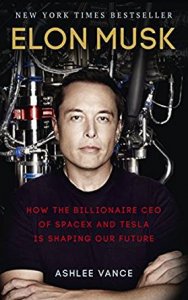 Ultimately, Elon Musk’s vision for SpaceX doesn’t stop here though. According to Ashlee Vance, author of Elon Musk, the reason behind Musk’s seemingly unstoppable entrepreneurship, lies in Musk’s view of the world. Musk is not your run-of-the-mill Silicon Valley entrepreneur, bent on making money or garnering fame. Instead, he is driven by one goal alone: to save the human race by relocating it to Mars. According to Musk, Earth, with its dwindling resources and vulnerability to asteroids, is simply not a suitable home for humanity in the long run.

It’s this mission that gives Musk the kind of determination to succeed that’s made him famous.

If you want to know more about Musk’s journey from a bullied nerd at school to one of the world’s most successful entrepreneurs, make sure to read our blinks to Elon Musk.