Inside ‘The Most Important Book Bill Gates Has Ever Read’

Chin up! Life’s not so bad after all.

If Bill Gates tells you he gives a book his “highest recommendation”, adding that it’s “the most educational” he’s ever read, then it’s probably not a bad idea to read that book, right? Well that’s exactly what Gates did say about Swedish physicist and statistician Hans Rosling’s radical and life-affirming work, Factfulness, a book that educates us on the true state of the human race and why there are many reasons for us not to be so glum about our current condition and things that are actually improving all the time.

Factfulness is no ordinary book. It reveals the truths behind the numbers about how we all live. By stripping the facts down to their bare essentials, Rosling is able to prove the world is a significantly brighter and more hopeful place than we are often led to believe. Rosling’s mantra: when you really look at it, things aren’t half as bad as they seem.

Although facts are his thing, being a statistician, Hans Rosling, with the assistance of his children and co-authors Ola Rosling and Anna Rosling Rönnlund, is not just about busting those oft-heard and dubious statistics. He’s just as much about attitude, showing his readers the importance of keeping a positive frame of mind. Through simple and easily applied methods, he teaches readers how to keep their focus on the good in life and how to prevent them from being so quick to assume the worst or getting sucked into a downward spiral of negativity—something that happens to even the most positive among us.

Why is it that we so often feel that the world around us is going up in flames, anyways? Rosling believes it has to do with the news: both how we consume it and how media organizations and journalists deliver it. People are more attracted to the most dramatic news stories. Good news just doesn’t grab us. This knowledge of human nature has meant that media organizations focus on bad news for entertainment purposes, knowing full well it will keep the consumer’s attention longer than a good or average news story.

It’s not just the type of stories being covered in the news that creates this pessimistic illusion, but the abundance of it, Rosling points out. We are being exposed to more bad news than any previous generation, and it’s all at our fingertips! Not only is more bad news being reported to us than ever before, but we can access it any time of the day or night. We can’t escape this feeling the world around us is going up in flames. However, this sensation is the most fundamental myth that Rosling debunks in Factfulness. 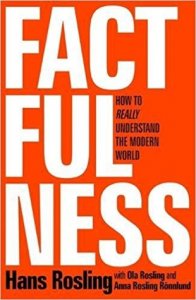 In reality, he says, people are living longer than they ever were, there is less poverty and fewer people than ever before are working under oppressive governments, companies, or regimes—facts most of us have rarely, if ever, heard on the news.

If we are to take only one key learning away from Rosling’s Factfulness what should it be? Simply this: instead of believing everything we see and read without question, we should challenge our assumptions by digging a little deeper behind the ‘facts’ and undertaking our own research using a variety of sources, including those available in the Blinkist library. By contextualizing information, we are more likely to uncover a far less ambiguous version of the truth and realize that things are often not as bad as they seem.