Pants on Fire? How To Tell if Someone is Lying

Can you spot the signs someone is lying, or maybe bending the truth just that little bit? The CIA certainly can. Take these tips from the pros and learn how you, too, can become a truth-sleuth.

Children learn that telling lies is bad. But as we get older, we come to know that there are many different reasons for avoiding the truth. Not all those hint at ulterior, malignant motives. There are white lies, kind-hearted lies, lies that save you unnecessary conversations, and even lies that have simply become a habit over time. I will, for example, round down the price of anything I’ve bought, no matter how cheap, even though I’ve paid for it myself. Go figure! Lies exist on a broad spectrum for a wide range of reasons but not all lies are innocuous. Sometimes it’s important to be able to suss the fact from the fib. So, when it matters, do you know how to tell if someone is lying to you?

Spy the Lie shares the secrets of Philip Houston, Michael Floyd, and Susan Carnicero, who have each worked in US government organizations like the NSA, CIA, and the US Army Military Police. Written with Don Tennant, the book reveals different ways in which these crack teams discern if someone is lying to them. In the 60-second video above, Page and Turner talk through some telltale physical signs someone is lying. For a fuller scope of lie-detection methods, make sure to check out the key insights from Spy the Lie on Blinkist which will take you about 15 minutes. If you only have about 5 minutes to spare however, here are some important truths about lying, according to Houston, Floyd, and Carnicero. Use this knowledge wisely! 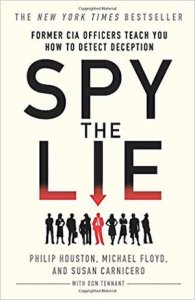 Why Do We Not Always Know When Someone Is Lying To Us?

Given how complex human beings are in both their actions and perceptions, it’s no wonder most of us don’t know how to tell if someone is lying to us. There really aren’t that many extremely skilled liars in the world! The main issue for us is in the division of our attention across a broad range of input. We find it hard to focus simultaneously on verbal and nonverbal cues, which means that someone could be entirely giving the game away, but you just might not be able to spot all the signs someone is lying at the same time. As every person has a subtly different communication style, it’s hard for us to pay attention to all the different ways in which someone could be changing their behavior. For example, many people claim that failing to maintain eye contact is a sign that someone is lying. However, eye contact levels vary person-to-person, anyway! Sure, they may be lying to you and unable to hold your gaze, but there are countless other reasons, too. For example, in some cultures, it’s simply rude to maintain eye contact, and for others, sustained eye contact can depend on things like the relationship in question, the person’s self-esteem, or simply socialization.

“There’s only a casual relationship between human behavior and logic.”
Spy The Lie

When it comes to spotting lies, it’s also really important to remember that we’re all incredibly biased. We decide how trustworthy we consider people to be based on a whole host of dubious “facts.” You often see this in cases where so-called upstanding members of communities are accused of crimes, but because people consider them to be honorable and truthful, they are believed over the victims. Or in the reverse, a person who’s viewed less favorably by society may be falsely accused easily because of the existing bias against them. It’s important to remember that we are all biased towards people who are more similar to us, culturally, racially, religiously, etc. However, the key is in recognizing and acknowledging the existence of your own prejudice and actively working to counteract it. Only then, will you be able to trust what you believe to be signs someone is lying.

There’s More Than One Kind of Lie

“All the lies that have ever been told or ever will be told fall into three categories, or strategies: lies of commission, lies of omission, and lies of influence.”
Spy The Lie

When we think about lying, it’s important to remember that there’s many more than one kind of untruth. In Spy the Lie, the authors talk us through how we can properly identify “the truth, the whole truth, and nothing but the truth.” Lies of omission are lies that simply leave out or gloss over details instead of inventing a whole new story. Lie of commission happen when the teller adds some overly-specific details to their stories to make them more believable. They might also try a little too hard to seem like a person who wouldn’t lie, such as suddenly being extremely polite, invoking religion, or swearing on something or someone that might be precious to them. Lastly, lies of influence, are those where the person can’t prove their truthfulness with facts, so they try to impress upon you that they’re a good person with an untarnished reputation and no reason to lie to you. So, now you know the three primary ways in which people lie, but how can you catch them in the act? While no method is foolproof, here are some chief signs someone is lying.

Cast your mind back to a time when you were a kid and you knew you were about to get in trouble. Maybe you stole a cookie, or spilled paint on the carpet, or gave the dog an edgy new haircut. In a fit of desperation, you lie and say that you didn’t do it, or try to pin the blame on a hapless nearby sibling. Think about how your body felt and moved in that moment. Did you get red cheeks, or feel suddenly cold, or fidget with your sleeve uncontrollably? These kinds of reactions all point to your stress responses activating, which in turn kick your fight-or-flight instinct into gear, preparing you to face the threatening situation at hand—in this case, an angry parent.

The same systems kick into gear when we’re adults, and if you’ve ever been caught in a lie—stop that, yes you have!—you’ll know that it can be a very stressful experience. When we’re under pressure, our bodies draw blood away from our extremities, such as face, feet, and hands. This causes them to get cold or itchy, meaning that we involuntarily start moving them to relieve the discomfort. Liars also try to resettle themselves in an effort to remain calm which means they’ll adjust parts of their body like hands, feet, and butt—otherwise known as anchor points. This is why interrogators often put the person getting questioned in a squeaky chair to amplify their movements.

Shifty behavior alone is not enough to catch someone in a lie, however. Some people are naturally more prone to displaying anxious behaviors than others, even in everyday situations. If you really want to know how to tell someone is lying, you have to look at their behavior in clusters—i.e. a group suddenly changed behaviors together—and try to notice changes in patterns. It’s also important to set up your questions in a way that helps you make the person not feel like you’re out to get them. If you can, ask specific but neutrally-worded questions, and pay close attention to the literal meaning of their answers. Repetition of words or phrases like, “truthfully” imply they’re trying to oversell their answer. By keeping your questions short and to the point, you also give the subject less time to think and to cook up any additional stories. You’re trying to spot changes in behavior, tone, and language. It’s important, too, to make sure you keep your tone level, so that the person responds to the content of your questions, not the way they’re delivered.

For more insight on how to get to the bottom of lies, check out the key insights from Spy The Lie on Blinkist.