Get to the Heart of Matters with Books by Esther Perel

Learn how to keep love burning for the long-term with the help of psychotherapist Esther Perel’s books on desire, sex and relationships.

Love and connection are the bedrock of what it is to be human and romantic relationships fascinate us to the point of obsession. And it makes sense—our connections to our romantic partners, whatever form they take, shape the narrative of who we become, the families we’ll have, and the lives we’ll build, together or apart. Relationships provide meaning, support, identity, immense joy, and, at times, indescribable pain.

Despite being so essential to our experience, we get little to no training on how to be good partners, how to communicate successfully, and how to keep love and desire alive once the initial spark has cooled. Into that absence of information steps psychotherapist, Esther Perel.

Esther Perel’s Podcast Asks Couples ‘Where Should We Begin?’

If you’ve come across Esther Perel already, it may have been through her podcast, Where Should We Begin? In it, the audience is invited to “learn, explore and experience” alongside the couples taking part, as they discuss the most intimate elements of their relationship—betrayals, heartbreak, abuse, neglect, sex, children, family. What’s striking about the show is how Perel helps couples to hear each other after, often years, of failing to communicate properly. It’s essential listening for anyone who has ever struggled in love, which, in the end, is all of us. But the guidance doesn’t end there. Perel is also the author of two books which can help even those at their wit’s end to get to the core of the issues with their relationships.

Learn How to Love Better with Books by Esther Perel

Through her podcast and her two relationship manuals, Mating in Captivity and The State of Affairs, Perel burrows deep into what drives us to form relationships, what breaks them apart and how our innate desire for security and love can invariably conflict with a deep-seated yearning for personal autonomy and freedom. 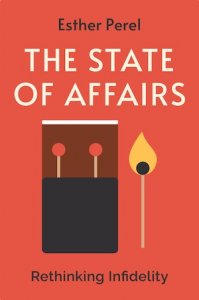 The State of Affairs

The State of Affairs

Before we look more closely at some of the key takeaways of Perel’s research into sex and relationships, here’s a quick overview of those two groundbreaking books.

The Conflict Between Security and Passion

In Perel’s first book, Mating in Captivity, the psychotherapist focuses on the sex lives of committed couples. Crucially, what interests her is the conflict between the passion and eroticism of the early days of dating and the reality, and sometimes drudgery, of a long-term relationship. What she notes is that, somewhat ironically, the thing that often brings a couple together—namely, lust—is the very thing that becomes glaringly absent in a committed relationship. In this, her first book, Perel seeks to understand and address the very human—and common—problem of how our innate quest for secure love often contradicts our pursuit of passion, and how we can work to resolve this with our partners to satisfy both needs without damaging our most precious relationships.

The Truth about Extramarital Affairs

In Perel’s second book, The State of Affairs—a New York Times bestseller now available on the Blinkist app—the reader is offered a whole new take on the subject of infidelity. Rather than judging or condemning those who have extramarital fairs, Perel instead examines what drives people to cheat on their partners, providing research-backed evidence to help the betrayed party better understand the causes of their partner’s actions. In addition, Perel breaks down the reasons why affairs are so traumatic for the party being cheated on. Interestingly, what she finds is that the root cause of pain for many is less related to sexual misconduct, but rather that a person’s whole sense of security can feel threatened when their partner cheats on them, security that has often been achieved through great sacrifice and hard work. The conclusion she reaches as to why people have affairs might surprise you: less motivated by desire or the thrill of the chase, those who cheat are more likely to be grieving the loss of an earlier stage in the primary relationship.

Key Ideas from Esther Perel’s Books on Relationships and Sex

So, what can we learn from Perel’s many conversations with committed couples and her work on infidelity, monogamy, and finding contentment in romantic relationships? Here are some key lessons from her work.

Our Identities are Built on Relationships

As Perel so succinctly puts it, “Infidelity hurts because it threatens our sense of self.” An individual’s sense of identity becomes inextricably interwoven with the identity of a long-term partner. Without realizing it, we begin to see ourselves less as two single entities but rather two halves of a whole unit. That’s why it is so incredibly painful when a partner is unfaithful; it is the willful destruction of the unit, the ‘couple identity’ that both parties had previously defined themselves by. This is devastating for the betrayed partner’s sense of identity, but also their sense of security. In the unit of two they are safe and secure with who they are; alone they are adrift and lacking an identity they recognize as themselves.

Perel warns us not to reject feelings of jealousy outright. In fact, she says, a little bit of jealousy can be healthy—and helpful—to a committed relationship. Why? Well, a small amount of jealousy can be an indicator that your partner really loves you. Rather than being a destructive element it can reinforce bonds between a couple and demonstrate that your partner is invested in your relationship and does not want it to be corrupted by external parties. However, on the flip side, don’t panic if your partner doesn’t express jealousy. It doesn’t mean they don’t feel a twinge of it every so often.

In the West, we are brought up with the idea that we should always tell the truth in a relationship, irrespective of the harm it might cause. Perel advises against honesty at any cost, highlighting examples of when an affair has actually benefited the primary relationship, or when revealing an affair would cause significantly more harm than good.

Infidelity Can be a Way of Exploring New Identities

As we’ve discussed, relationships are intrinsically tied up with how we see ourselves. While many of us would assume that someone would only have an affair if he or she was deeply unhappy at home, Perel reveals this isn’t always the case. As it turns out, even people who are very happy in their primary relationship have affairs as a way of trying out different identities and experimenting with sides of their personality that they may have previously denied themselves.

An Open Relationship Doesn’t Work for Everybody

It’s important to remember that breaking the rules, or keeping a secret, can play a large—if not the largest—part in determining if someone is going to have an affair, more so than sex, love or boredom in the primary relationship. Although Perel concedes that non-monogamy can work for some people, she asks us to bear in mind that it is not a failsafe solution to infidelity as it doesn’t allow for this tantalizing rule-breaking element.

What we learn from Perel’s extensive research into the lives of couples is that trying to understand the “bad” behavior of a partner, rather than outright condemning it, is going to lead to a better outcome for both parties. Relationships are never black and white, and what at first might seem like an outright betrayal of trust may have a much more complicated root cause that, once understood, has a chance of being overcome. It’s a cliche, but also a truism, that communication between the two partners is key.

Finally, there are many stages between monogamy and nonmonogamy that can be explored until a solution is found that both partners feel comfortable with, allowing for the freedom and autonomy that many of us in relationships still yearn for without sacrificing the love or security we all need.

If you’d like to learn more about finding contentment in your relationship, check out The State of Affairs on the Blinkist app now.