Gawking at Conspiracy with Ryan Holiday

An incredible story about the downfall of a media giant and the limits of free speech.

Is free speech really as free as we like to think it is? Considering America’s First Amendment, and the statutes in many other countries’ constitutions that took inspiration from it, we think that such freedom is watertight.

But, that is not necessarily the case. One individual or organization can publish an article about another individual under what is felt to be constitutionally protected free speech, only to be held liable in a court of law for slander.

Ryan Holiday, who appeared on an episode of Simplify, Blinkist’s podcast, chronicles one case where the consequences of free speech become readily apparent in his new book, Conspiracy, now available in the Blinkist library. 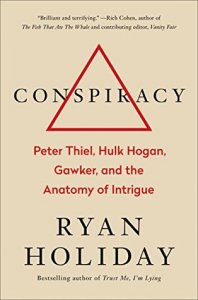 Holiday takes as his case study the legal proceedings between Internet news site Gawker and the former wrestler Hulk Hogan.

In his Simplify interview last year, Holiday defended his perceived love of controversy:

“What I’m trying to do is generate discussion with my work. [I like to] take some poorly-understood but generally held assumption and I like to challenge it.”
Ryan Holiday on Simplify

And Conspiracy definitely offers that, showing how free speech can be a tool to infringe upon a person’s dignity, such as when Gawker published news that outed Peter Thiel, a major player in Silicon Valley best known for co-founding PayPal, as gay, despite his desires and attempts to keep his private life private.

Holiday’s book chronicles the complex legal maneuvers Thiel then undertook that, in the end, drove Gawker out of business.

Connecting all the dots was certainly imperative during Holiday’s research of the Gawker v. Thiel case. And, the connections he makes in the course of the book make the fact this is a true story all the more remarkable.