See You in a Flick! How Facebook is Redefining Time

Facebook has invented a new unit of time, but what does this mean in practice, and what does it have to say about how we think about time generally?

Last week, Facebook raised some eyebrows when they announced that they’re introducing a new unit of time, the flick. So, what is it? A flick is exactly 1/705,600,000 of a second. If you know your time units, you’ll notice that a flick is slightly bigger than a nanosecond, or one thousandth of a millionth of a second. But why do we need this teeny little time unit?

Invented by Christopher Horvath, a former employee at Facebook, the flick solves a common problem when it comes to working with different media frame rates and frequencies. This gets a bit complicated, but bear with us. You probably know that when you’re watching a movie, what you’re actually watching is a string of static images flicking by at a certain rate, usually at 24 frames per second. This is a standard frame rate, which has been around for a long time. Over the years, many new frame rates for both video and audio have emerged. Most of us never have to think about this, but for programmers, working with all these different frame rates can be a nightmare. The reason is that they break down into rather unwieldy fractions of time. For instance, a single movie frame is 0.04166666… seconds long. That’s not a very practical number. Thus, when matching different frame rates, for instance, programmers have to resort to approximations and workarounds, which can lead to errors. Just like humans, computers just prefer round, even numbers.

This is where the flick comes in. It is designed to be divisible with all common frame rates and frequencies, without resulting in long rows of decimals or fractions. A movie frame, for instance, is 29,400,000 flicks, a nice round number. Or take the 120 Herz with which your TV beams pictures into your living room. 1/120 of a second is 5,880,000 flicks. Also a nice round number. Using flicks, rather than conventional time units, will make things a whole lot simpler and ultimately lead to more harmonious media experiences.

Although the importance of the flick is mainly technical, other companies in the past have sought to introduce new units of time for more far-reaching reasons. For instance, in 1998, watch company Swatch introduced what they called Internet Time. In this time measurement system, the 24 hours of the day is divided into a 1000 so-called beats. Internet Time was meant to do away with the need for international time zones and lead to a new way of experiencing time, but, although the concept led to some pretty rad watches, it never caught on. Nonetheless, it raises some interesting questions about how we perceive and talk about time.

Do we have to stick to hours, minutes and seconds? Or is there another, more natural way of slicing up our time? 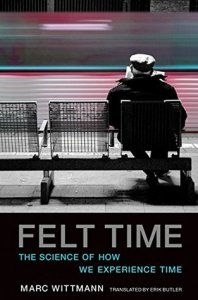 According to the German psychologist Marc Wittman, there might be. In his book Felt Time, Wittman argues that from our brains’ perspective, life is actually a series of two- to three-second intervals. This appears to be the length of time our brain registers as what Wittman calls a “unit of now”. You can see evidence of this in the fact that many verses of songs and poems are this length.

Read more about this and other interesting facts about our perception of time in Felt Time, by Marc Wittman.