Feed Thy Light’s Flame: The Benefits of Creative Theft

Plagiarism software caught the Bard red-handed. Knocks him down a peg, right? Hardly.

Shakespeare didn’t write his plays! So goes the main idea of an argument stretching back decades if not centuries. How could this lower-middle-class-born chap produce works that cut to the very heart of human experience? And, with a recent news story, one answer becomes clear: He stole them.

Well, maybe that’s a bit exaggerated. Scholars running Shakespeare’s works through anti-plagiarism software found phrases from some twenty-odd plays matched up with an unpublished manuscript from the 1570s. Now, it wasn’t a perfect 1:1 alignment, so he’s in the clear, right? Well, the researchers said the chances these words and phrases would appear in roughly the same order on their own was less than 1/1,000,000,000, so pretty much a “no.”

Does this discredit Shakespeare? Should his works become diminished in our eyes? No!

The truth is, this kind of theft is crucial to the development and evolution of every art form. It’s what the artist does after stealing some particular gem that separates the wheat from the chaff. 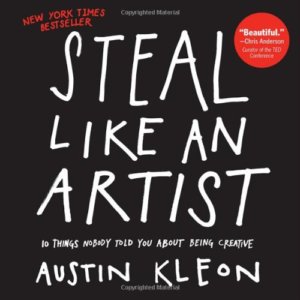 As Austin Kleon makes clear in his book, Steal Like an Artist (the title itself cribbed from a quote by Steve Jobs, Igor Stravinsky, or Pablo Picasso, depending on whom you ask), artists of all stripes have been up to all kinds of thievery over the years. Let’s be clear, though, we’re not talking just copying here (or actually physically stealing artworks). The key to artistic theft is that, like Ezra Pound suggests, you create something new.

One of the frustrations of a budding artist can be the sense that their work is not original enough, leading to anxiety and burnout. Wearing your influences on your sleeve is not necessarily a bad thing. That Shakespeare wrote Troilus and Cressida shows he had familiarity with Geoffrey Chaucer’s works. Plots and characters from other Shakespeare plays can be traced back to his having read ancient Greek and Roman writers such as Ovid and Plutarch. Pyramus and Thisbe are kind of obscure literary figures, but call someone a Romeo and everybody knows what you’re talking about. That is the power of theft.

Sometimes theft allows you to state the tradition which you hope to advance. In that case, such plundering becomes all the more essential, because you can further investigate the artists who inspire you and discover who inspired them and just keep going, merrily thieving along the way. The deeper you go, exploring, practicing, and being inspired, you’ll strengthen your artistic foundations as well. Everything you build on top of that will be all the sturdier for it.

One of the things that tends to be forgotten is that many of the artists we consider masters in their field were deeply knowledgeable individuals, who had devoted a significant amount of time to exploring what had come before. And they struggled with these influences. As they worked on their craft, they too created works they hoped would never see the light of day for one reason or another. Artists’ archives are filled with pieces their editors nixed, with lines they crossed out from their compositions.

Just as fire cannot exist in a vacuum, artists need their own fuel. Mainly, this comes in the form of delving deep into the works of other artists. And they don’t even need to be artists working in the same medium or cultural tradition, either. There are countless works out there born from these kind of cross-pollinatory encounters. Painters and sculptors pluck bits from literature to depict. Composers have created musical pieces inspired by paintings, plays, history, or new cultures they encounter.

In the end, artistic theft is only as worthwhile as the end to which it is placed. People don’t remember Shakespeare’s Richard III because Shakespeare stole phrasing from George North. People remember Richard III because Shakespeare took North’s words and used them to create one of literature’s most compelling villains, the title character. And, heck, if you’ve ever used the phrase “my kingdom for a horse” or “the winter of our discontent” or created some new variation on either of those, then you’re stealing from Richard III. The circle of theft keeps rolling along.