This Book Made Adele Feel Ready to Live Her Best Life

What kind of life would you have if you followed your desires and intuitions? Glennon Doyle asks herself, and us, who we really want to be.

Have you ever read a book that changed your life? Soulful international superstar Adele certainly has. On August 15th, she shared on Instagram that Glennon Doyle’s 2020 bestseller, Untamed, had made her feel capable of living a joyful, liberated life.

“If you’re ready — this book will shake your brain and make your soul scream. I am so ready for myself after reading this book! It’s as if I just flew into my body for the very first time. Whew!”
— Adele

Urging her 39 million followers to read it with a highlighter on hand for note-taking, Adele’s not the only influential public figure to endorse the book wholeheartedly. Actor, producer, and entrepreneur, Reese Witherspoon, also selected Untamed as part of her Hello Sunshine book club.

Kristen Bell, star of Frozen and The Good Place, has also thrown her support behind the book, saying that Untamed “reminds us it’s okay to be flawed, […] to go against the grain, […] to speak your truth.”

So what is it about Doyle’s book that’s captivating so many people? You can check out the key ideas from Untamed on Blinkist, but right now, we’re going to take a deeper look into the book that’s been considered empowering and life-changing by so many. 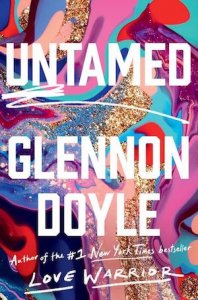 The Cage of a ‘Perfect’ Life

Glennon Doyle was dead set on cultivating the perfect life. She strove towards becoming a flawless mother, wife, Christian and writer—and it was going well for her. Outwardly, she had an ideal family, a successful career as a published writer and blogger and a host of followers, online and off. Yet all was not as it seemed.

“We forgot how to know when we learned how to please.”
— Glennon Doyle, Untamed

Following her husband’s serial infidelities, Doyle managed to reconstruct her marriage and write a book about what she’d learned in the process called Love Warrior. While she was on the promotional tour for that book, an unexpected event took place which would change the trajectory of Doyle’s life forever: she fell head over heels in love with Abby Wambach, a retired soccer player and two-time Olympic gold medallist.

Meeting Abby was the catalyst that ultimately made Doyle realize that she had built a life designed to please others and had been neglecting her own desires. What followed was an inspiring process of unlearning and rebuilding which she shares in Untamed.

Doyle was a writer used to being in charge of her own narrative, both in her work and day-to-day life. Negotiating the plot twist of meeting and falling in love with a woman proved to be a turbulent and eye-opening journey. How could she have possibly have gotten to a point where she didn’t even know that could happen? In Untamed, she explores how she found herself trapped inside a box of her own making.

“These days, I am clinging to stories of hope as if they are life rafts. Reading Untamed has helped me course correct the uncertainty, fear, and anxiety that I’m constantly fighting. This book has been my North Star for being vulnerable and self-examination.”
— Kristen Bell

In Doyle’s fond memories of childhood, she recalls being completely and utterly un-self-conscious, able to play freely and follow her impulses. At around the age of ten, she began to internalize wider societal messages about how a ‘good’ girl should look and behave.

She found herself starting to buy into the idea that she should be obedient, pleasing, thin and beautiful. This made her depressed, anxious and eventually, bulimic. She lost a vital connection with whom she really was and found herself engaged in unhealthy coping mechanisms, relying on alcohol and drugs to numb the intense pain she felt daily. That was, until she became pregnant aged 26. This was to be her first complete life turnaround.

She got sober, married the child’s father and made a promise to herself to always take responsibility for her decisions and to never deliberately tell an untruth. She became a role model for thousands of people who followed her blog which painted a picture of harmonious family life. Little did she know that in living the life that she thought was ‘right,’ she was lying to herself.

“An Anthem for Women Today”

Actor Kristen Bell called the book “an anthem for women today,” and it’s not hard to see why. Doyle’s awakening allowed her to gain clarity on the origins of much of her thinking and just how inherently sexist the views she held were.

For her, this meant repressing her own true nature to fit in with a sexist society. She had contorted herself into smaller and smaller cages to try and become the “perfect” woman that society expected her to be.

“Blessed are those brave enough to make things awkward, for they wake us up and move us forward.”
— Glennon Doyle, Untamed

As the mother of daughters herself, falling in love with Wambach made Doyle realize that she was inadvertently teaching them that women should repress their needs and desires to become martyrs for their families, to uphold a standard dictated by society.

These beliefs were so ingrained that she couldn’t see that the life she’d worked hard to build wasn’t the one she actually wanted. Re-learning who she was and what she desired was a difficult, enriching journey, and in writing Untamed, she hopes to empower other women to do the same in their lives, however that may look for them.

Connecting to your Core Self

With so much pressure and huge changes to consider, Doyle needed a way to ground herself through turbulent times. She faced some backlash because of her new relationship and prominent Christian leaders claimed she had abandoned her faith by choosing to be with Abby. Even her own mother thought that their relationship was a mistake.

“This memoir is so packed with incredible insight about what it means to be a woman today, what […] we learn as young girls about how to behave or believe, and why we need to free ourselves from a lot of these ideas that don’t work anymore.”
— Reese Witherspoon

Rather than crumbling under this criticism however, she cultivated a grounding tool that she came to call “The Knowing.” By giving herself moments of stillness every day which would grow into a meditation practice over time, she found a way to connect to her true self and let it guide her.

She also used the power of her imagination to picture a life rebuilt in the way she wanted it to be. By developing this clear vision, she was able to brush off outside opinions and not seek external validation like she had always done. She could continue her connection to her God, her religion, and her mother and still live the life that was right for her.

Doyle and Wambach got married and cultivated a rich life for themselves and their family. It looked nothing like the nuclear family that Doyle had once committed herself to creating, but in the process of rebuilding her life she realigned with herself, and managed to become wildly happy.

“This life is mine alone. So I have stopped asking people for directions to places they’ve never been.”
— Glennon Doyle, Untamed

Untamed ultimately aims to help you connect to your deeper, instinctual self. It empowers you to hold up a mirror to your own life and identify places where you don’t feel fully free. Instead of feeling locked in your own life, you can use the strategies in Untamed to learn how to tune into your intuition, embrace your own desires, and design the wildest, most fulfilling life you can imagine!

Anyone else now really excited about Adele’s next album?