Dear Leader: What Life Is Really Like Inside North Korea

Curious about North Korea and the Kim dynasty’s rise to power? Here’s a quick look at how the totalitarian regime arrived at its present-day state.

If you’re courageous enough to keep up with the news these days, you’ve likely been seeing a lot of hubbub about North Korea and the country’s supreme leader, Kim Jong-un.

For many of us living in the Western world, North Korea remains shrouded in mystery. But in Nothing to Envy: Real Lives in North Korea, award-winning journalist Barbara Demick demystifies the Democratic People’s Republic of Korea and offers eye-opening insights into what daily life has been like under the rule of Kim Il-sung, Kim Jong-il, and Kim Jong-un. 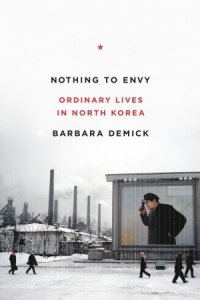 As the world begins to see controlled glimpses of North Korea, it’s important to keep the peninsula’s past in perspective. Yet if you’re unfamiliar with the aftermath of World War II and North Korea’s role on the world stage since then, here’s a quick look at country’s history as outlined in Nothing of Envy.

During World War II, Korea was a Japanese colony with little influence over other nations. But that all changed when the peninsula was drawn into the postwar power struggle between the United States and the Soviet Union. To mollify the USSR and maintain stability among world powers, the US divided the Korean Peninsula into two halves, leading to the emergence of two republics in 1948. Kim Il-sung, a resistance fighter who gained fame during the Japanese occupation, founded the Democratic People’s Republic of Korea in the North, and in 1950, tensions between the two sides led to the Korean War, which lasted three years and was responsible for 3 million lost lives.

The Dawn of a Dictatorship

Once the Korean War was over, Kim Il-sung established a communist government with himself in charge. He assumed the power of a dictator and rewarded his supporters, while persecuting those who opposed him. The ruthless leader then took things a step further and divided society into three categories based upon political affiliation. Loyalists occupied the highest tier and were given access to better goods and services. At the other end of the spectrum, those who opposed the regime were given lesser freedoms. To make matters worse, a citizen’s status was deemed to be hereditary, making it nearly impossible for someone to rise above their rank.

A Regime on the Rise

As Kim Il-sung began rebuilding postwar North Korea, he envisioned a new era of self-sufficiency built upon the communist philosophies of Marx and Lenin. The oppressive leader insisted that the world outside Korea contained nothing of value, and he instructed government officials to incorporate this ideology into the daily lives of all North Koreans, requiring them to attend rigorous training sessions at work. The government also manipulated broadcast media to support Kim Il-sung’s ideology, while also portraying the supreme leader as an infallible figure.

The Collapse of Communism

When the Soviet Union dissolved in 1991, North Korea’s economy consequently collapsed. Electrical shortages became increasingly frequent in the country. Running water and heating were similarly scarce. Despite the dire situation, the government insisted on developing nuclear weapons, which alienated international aid donors. And in 1993, North Korea pulled out of the Nuclear Non-Proliferation Treaty, raising the specter of nuclear weapons for the first time since the 1960s. Food distribution centers became unable to feed the population, and North Koreans were forced to travel simply to survive. By the time Kim Jong-il assumed power following his father’s 1994 death, the famine had killed millions, leaving countless North Koreans with no hope other than to risk their lives to escape the country.

A New Generation Comes to Power

Kim Jong-il died in 2012, which is when his third son and current supreme leader, Kim Jong-un, assumed power. The young dictator initially seemed to support economic reform and wanted to improve the population’s well-being. However, before long, the ruler began to spend a considerable amount of the country’s resources on vanity projects and weapons programs. North Korea launched the nation’s first satellite in 2012, and also successfully carried out a nuclear test with others soon to follow.

After diplomatic relations with the Trump administration got off to a rocky start in 2017, Kim Jong-un appears to have come around on a number of fronts and is ostensibly in the midst of denuclearizing his nation while reconsidering reunification with South Korea. It’s too soon to say if the supreme leader’s change of heart is here to stay, but with any luck, this could be the dawn of a new era for the partitioned peninsula.

If you’re interested in learning more about North Korea and the Kim dynasty, dive into the full blinks to Nothing to Envy now, or explore the bevy of other books in our library about today’s political landscape.