Dealing with Status Anxiety When Life Is Static

As many of our lives remain paused, perhaps now’s a good time to reassess our ambitions.

In the midst of massive economic upheaval, and as the threat of a second wave of Covid-19 looms large, many of us remain in relative lockdown with our lives at a standstill. And as millions of people file for unemployment each week, it’s clear that the path forward for many of us will substantially differ from the lives we were leading prior to the pandemic.

In the Western world, our identities are largely linked to our professions and our possessions. And if the current crisis has knocked you off your career path or halted your climb up a corporate ladder, you might be struggling to reconcile your present employment status with wherever you were previously. It’s this disparity, between our realities and our expectations, that can create status anxiety — a fear of not being successful enough.

At Blinkist, we’ve seen an increased amount of interest in status anxiety. And while this isn’t surprising in light of the economic climate, it’s likely that many people struggling with this type of stress aren’t fully aware of it, much less how to overcome it. So to breakdown the causes of and cures for this condition, here’s an overview of what you need to know about status anxiety.

What Is Status Anxiety?

Popularized by philosopher Alain de Botton in his 2004 book Status Anxiety, the titular affliction refers to a sense of uneasiness that can occur in response to perceived societal pressures. For instance, you may experience status anxiety if you feel inadequate in comparison to someone who makes more money than you do, drives a nicer car, or has a more impressive job title. 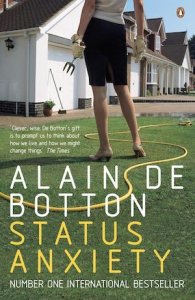 Despite their similarities, status anxiety shouldn’t be confused with envy or jealousy. Rather, as de Botton explains, it’s a form of stress that arises because our sense of self-worth can hinge on how others view us. And in a world where many people wrongfully equate someone’s value with their job title or bank account balance, people can end up feeling depressed when they don’t possess traditional markers of success.

When we believe we’re living up to what’s expected of us, we’re more likely to feel better about ourselves. And, conversely, when we don’t feel like we stack up against others, we’re more likely to lose self-confidence. The feeling of status anxiety is so ingrained in modern society, that it can seem like an innate and unavoidable aspect of the human experience. But surprisingly, the rise of status anxiety is a relatively recent phenomenon.

The Emergence of Status Anxiety

Although it may seem natural to envy others or feel unsure about our individual value, such thought patterns have only emerged in the past couple of centuries. To put things in perspective, consider medieval Europe. During this era, a person’s social status was solely based on their bloodline, and if someone was born to peasants, there was no way they could ascend into the ranks of royalty. This social system survived for so long because there was no organized movement for equality. And while that certainly led impoverished people to live less privileged lives, the lack of social mobility also meant they didn’t spend their days stressing out about their status.

Circumstances started to change, however, following the American Revolution as people began to receive recognition in response to their economic achievements rather than their hereditary. This gave rise to meritocracies that rewarded hard work and ingenuity, making it possible for people to rise through social strata according to their own ambition. Yet as our ancestors’ capacity to set goals expanded, so too did their capacity for humiliation, setting the stage for status anxiety.

Another factor to consider is the dramatic evolution of employment in America. In the early 1800s, 80 percent of people worked for themselves. Now, it’s the opposite, with more than 90 percent of the workers collecting checks from corporations. This prevalence of today’s triangular corporate structures relies on having many people at the base of an organization and relatively few at the pinnacle. This can create an unhealthy level of competition in the workplace, further fueling status anxiety.

Now that we’re living in an era when wealth and success are attainable through hard work and ingenuity, people perceive an affluent lifestyle as within reach — or even expected. Yet when we don’t feel we satisfy our expectations, we can experience status anxiety as a result. Fortunately, there are ways to avoid such unnecessary suffering, as De Botton outlines in his book.

Modern society teaches us to want big paychecks and expensive cars, but rather than chasing after the same goals as everyone else, take a step back and consider if those objectives actually resonate with you. Keep in mind that the majority of people aren’t always right, and even individuals you admire can be prone to confusion and error. Listen to your inner voice and arrive at your own conclusions about what is or isn’t valuable.

Another tactic to overcome status anxiety is to vigorously assess your motivations, ambitions, and fears from time to time. Don’t be afraid to question traditions and second-guess whether someone’s behavior is backed by reason and logic. Ask yourself if the judgments of other people actually matter, because more often than not, their opinions aren’t worth worrying about.

Realize that Status Is Illusory

Our culture’s social hierarchy and its standards are constantly in flux. People who’ve earned status in today’s society may not have found success at other points in time. And formerly desirable status symbols are now eschewed by modern consumers. Take, for instance, today’s social media influencers, whose talents may not have translated to wealth during earlier eras. And then there are gas-guzzling SUVs, which were once incredibly popular among the up-and-coming, but have now been supplanted as a status symbol by sleek electric vehicles.

Although it currently seems like success in a commercial endeavor will always increase someone’s status, society may soon realize that equating money with decency is a massive mistake. So, instead of attempting to achieve a specific set of circumstances in order to feel content, understand that status is an intangible influence that’s always evolving. Once we come to terms with that, it’s possible to forget about our differences and treat everyone as an equal.

Advertising and marketing campaigns have trained us to lust after fine clothing, shiny electronics, and other expensive amenities. This is a trap that only further entrenches us in status-seeking behavior. So instead of continuing down this path, we can choose to shed our materialistic habits and embrace a greater appreciation for art.

By adopting a sensitive, bohemian approach to life, we can transcend traditional notions of status and find more meaning in our lives. The best way to make this work is by surrounding yourself with people who share similar values. By living among individuals who don’t judge themselves or others by material standards, you can banish status anxiety from your life for good.

Shift Your Views on Status

As society’s usual markers of success are stalled, now’s a good time to ponder a future beyond this pandemic, reflecting on our lifestyles and reassessing our motivations and fears about underachievement. By doing so, we can emerge from this experience on a path toward a more meaningful life — one that’s defined by our own terms rather than those established by a flawed society.

If you’re interested in learning more about status anxiety, launch the Blinkist app today to discover even more takeaways from Alain de Botton’s eye-opening book. You can also explore several other titles about anxiety, including Self-Compassion by Kristin Neff, The Wisdom of Insecurity by Alan Watts, and To Have or to Be? by Erich Fromm.