When older generations fail to act, who’s going to step up to the plate?

“We’re children. You guys are the adults. You need to take some action and play a role. Work together. Get over your politics, and get something done.”
David Hogg on CNN

This past February 14, 17-year-old David Hogg and his 14-year-old sister, Lauren, began their morning in much the same way as they had during the hundred or so schooldays that preceded it. But this day wouldn’t unfold like the rest, as the siblings would soon witness one of the most devastating massacres in modern American history.

David, a senior at the time, and Lauren, a freshman, were both enrolled at Marjory Stoneman Douglas High School in Parkland, Florida. And on Valentine’s Day, a former attendee of the school returned to the campus with an assault rifle and took the lives of 14 students and three members of the school’s faculty in addition to injuring more than a dozen others.

This wasn’t the first school shooting to occur in the U.S. this year, and, unfortunately, it wouldn’t be the last. Yet, the tragic events that transpired that day would ignite an unprecedented movement led by David, Lauren, and several of their schoolmates who were fed up with the increasing frequency of such tragedies and the American government’s apparent apathy toward reforming the nation’s incredibly lax gun laws.

By harnessing the power of Twitter, Facebook, and other social platforms, the #NeverAgain movement that began that day quickly captured the attention of the media and many millions of people around the world. And on March 24, less than six weeks after the shooting, the surviving students had organized the March for Our Lives, a demonstration that united hundreds of thousands of protesters in Washington, D.C., and countless others at more than 800 similar events in countries across the globe. 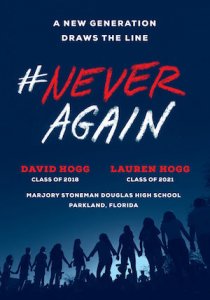 And now, David and Lauren are continuing their mission to spread their message in #NeverAgain: A New Generation Draws the Line. This manifesto is focused on speaking truth to power, and it details the goals and inner-workings of the movement that aims to change America’s attitude toward gun control. The book underscores the campaign’s objective to succeed where older generations have failed, and it explains how the #NeverAgain movement plans to eradicate the epidemic of school shootings by attacking powerful lobbies and drawing attention to political ineptitude.

Although #NeverAgain might be the most well-known movement organized by today’s teenagers, it’s far from the only example of effective efforts initiated by “underage” individuals. Here’s a quick look at a few other campaigns led by inspirational youths.

In 2013, after learning about Mahatma Gandhi and other activists, 10-year-old Isabel Wijsen and her 12-year-old sister, Melati, founded Bye Bye Plastic Bags, a social initiative to reduce the use, sale, and production of plastic bags in their home country of Bali. They began by educating the public about the harmful impact of plastic on animals, the environment, and human health, while also sharing information about ways to be part of the solution. The sisters then worked with their local government to create an environmental policy, and, in 2016, they succeeded in lobbying the Balinese airport to ban one-time-use bags. And, amazingly, this past January, the entire island of Bali was declared free of plastics bags as a result of the Isabel’s and Melati’s efforts. The BBPB movement is now an internationally recognized organization that employs a staff of 25 people and has spread to 16 cities around the globe. The sisters’ work has even inspired the people of Indonesia to ban all plastic bags by 2021!

Nicknamed the “Anti-Bieber,” 18-year-old Xiuhtezcatl Martinez is far from your typical teenager. A hip-hop artist and former student at a Colorado high school with a curriculum focused on environmental awareness, Xiuhtezcatl is now the Youth Director for Earth Guardians, a global collective that spans six continents and consists of thousands of students unified on a quest to defend the planet. Xiuhtezcatl has made it his mission to mobilize teenagers across the world to demand greener policies from our environmental lawmakers. Under his leadership, Earth Guardians has given a voice and direction to countless individuals seeking to change the world by empowering them to make measurable changes in their own communities. Currently, Xiuhtezcatl is continuing to fight the good fight by suing the federal government and the Trump administration for failing to act on climate change.

In 2016, 11-year-old Marley Dias, a budding bibliophile frustrated by the lack of books about young girls of color, embarked on a mission to collect 1,000 books featuring protagonists she could identify with and then deliver them to young girls who felt the same way she did. Not only did Marley far exceed her goal by collecting and distributing more than 11,000 such books, but she’s also since authored a book about her activism. Marley Dias Gets It Done (and So Can You!) focuses on the importance of literacy and diversity and includes hands-on strategies for becoming a lifelong member of the literati. Marley continues to inspire young readers around the world, and she’s also compiled an online resource that includes a list of more than 1,000 books that feature black girls as protagonists.

If you’d like to learn more about David and Lauren Hogg and how the movement they helped start is continuing to change the world, explore their new release, #NeverAgain: A New Generation Draws the Line.