Charting a Course for Compassion: A Journey Through Karen Armstrong’s Books

Do you want to learn more about the history of the major world religions, or how to approach difficult conversations with openness and understanding? Karen Armstrong’s books are the answer!

Karen Armstrong has written more than 20 books on faith and the major religions. She entered a convent at the age of 17, however, she later left due to the restrictive practices and harsh discipline. The former nun distanced herself from organized religion, moving from a conservative faith to a more liberal version of Christianity. She published a memoir, Through a Narrow Gate in 1982 detailing her own journey with religion. This led to the newly established Channel 4 asking her to present a programme about St Paul, a project which brought her to Jerusalem. She has described this as a “breakthrough moment”, where she had a revelation about connections between the major world religions. She has gone on to write extensively about comparative religion, with her books translated into 45 languages.

When she won the 2008 TED Prize, the idea Karen Armstrong asked the organization to develop with her was a Charter for Compassion. This was a document around which religious leaders could work together towards peace, and was a call to action, not just words on a page. She wanted to unite religious leaders around the shared value of compassion, and focus on this essence of faith they had in common. Speaking about why she created the Charter for Compassion, Armstrong said “instead of seeing religion as part of the problems of our world, would actually help religion to make a positive contribution towards peace.”

Much of what we hear about religion in the media is voices of hatred or extremism, and Armstrong wants this to change. In 2013 she received the first Nayef Al-Rodhan Prize for Transcultural Understanding from the British Academy, and was named an Officer of the Order of the British Empire (OBE) in 2015. As an ambassador for the United Nations Alliance of Civilizations she promotes understanding between different faiths and cultures, and advocates for opening dialogues and exploring common values.

Are You There, God? It’s Me, Karen

Karen Armstrong’s book A History of God (1993) traces the related histories of the Jewish, Christian and Muslim concepts of God. The original hardback and paperback sold over 700,000 copies due to its readability and its thoroughness. It is a wide-reaching volume that looks at classical philosophy, medieval mysticism, the Reformation, colonial expansion, Enlightenment and modernity – and how concepts of God have evolved alongside societal shifts. 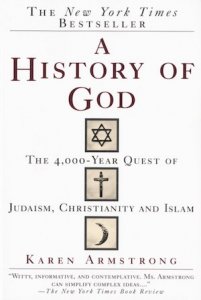 A History of God

A History of God

Armstrong explores how the world’s three main monotheistic religions—Christianity, Judaism and Islam—have shaped world history. This is a fascinating read that details the concept of God in each of these faiths, and how ideas of God have been shaped by different thinkers.

Armstrong shows the differences between Yahweh, Allah and God but also the similarities in their development, for example, the rise of mysticism in all three faiths. This was the result of the fact that while having a God with personal aspects was relatable, it was also dangerous. She explores Sufism, Kabbalah and Christian mystics such as Meister Eckhart.

A key takeaway from A History of God is the need for God to be relevant to the times and to serve society. Armstrong states that the concept of God must face the challenges of the common day, and adapt to meet them. For example, with the advent of feminism the traditional male concept of God is no longer acceptable.

“God is neither he nor she”, Karen Armstrong has written subsequently, reflecting a new liberal view. She also engages with the rise of atheism, which she sees a rejection of the current concept of God, rather than of God outright. God has been part of human society for millennia and Armstrong says that this will be the case long into the future, once God continues to adapt and evolve.

Islam: A Short History (2000) takes a fascinating tour through 1,500 years of Islamic history, showing the huge growth of this religion which now has almost two billion followers. It grew from a small sect in seventh century Arabia to a vast empire before falling prey to Western colonial expansion in the modern age. 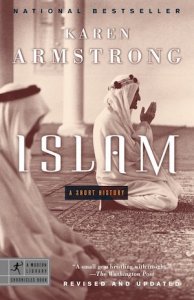 Today, Islam remains complex and largely misunderstood. For many in the West, their conception of Islam is a series of stereotypes and clichés. This is not a new phenomenon. Since the Christian Crusades in the eleventh century, Islam has been viewed with fear and suspicion by Western society.

Armstrong shows the complexities of Islam, and helps readers understand the faith and its history. Islam, unlike Christianity or Hinduism, does not have religious icons. Instead, emphasis is placed upon the actions of Muslims on Earth. A key message of the book is that in Islam, there is a strong focus on striving for peace and compassion in the present.

Islam is a uniquely political religion in that it focuses on creating a just society in the here and now, rather than in an afterlife. Armstrong explores the history of this religion, from its prophet, Muhammad, receiving his first revelation in 610 when on retreat to pray and fast during Ramadan to the current day.

An important point that Armstrong makes it that fundamentalism is not unique to Islam as there are fundamentalists in every religion. She points out that the actions and rules imposed by groups such as the Taliban contradict the prophet’s message of peace and compassion in the present.

Compassion is the Key

Twelve Steps to a Compassionate Life (2010) is one of the most popular Karen Armstrong books. It is a practical and clear guide to practicing compassion and making this a cornerstone of your life. Armstrong says that compassion is feeling another person’s pain as though it were your own. While we do have a natural ability to put ourselves in another’s shoes, to make compassion an integral part of your life takes a lot of work. Armstrong shows how compassion is a shared value across many faiths, following the Golden Rule: treat others as you would want them to treat you. 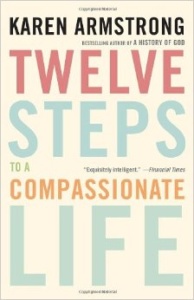 Twelve Steps to a Compassionate Life

Twelve Steps to a Compassionate Life

Armstrong explores how our ‘old brain’ is wired for survival, and makes us take selfish actions. The ‘new brain’ has developed for reasoning, reflection and compassion. It is this neocortex that has us searching for meaning, and turning to religion and art.

Armstrong turned her extensive research into a clear, actionable 12-step plan which aims to cultivate compassion and seeks to counter prejudices, egoism and violence. For this programme to be successful, you must practice until the discipline has become an integral part of your life. It is not a quick fix, but rather a slow and incremental change.

The steps Armstrong sets out involve studying the traditions of compassion in the teachings of the Buddha and Confucius, practicing mindfulness, and looking at yourself with compassion and kindness.

One of the most important steps is engaging in meaningful discourse. Learning to have productive dialogue with people who have different opinions to you is more essential than ever in these fractious times. Whether this is creating interfaith dialogue or trying to bridge the gap between politics, Armstrong teaches readers to consider other points of view and be open-minded. Twelve Steps to a Compassionate Life offers a clear and measured path to becoming more empathetic and broadening your world view.

Karen Armstrong’s books offer not just the history of these faiths, but foster empathy and understanding between groups. With projects like the Charter for Compassion she is opening up essential conversations, and focusing on creating more positive and empathetic practices across different faiths. This is summed up in Twelve Steps to a Compassionate Life:

“We can either emphasize those aspects of our traditions, religious or secular, that speak of hatred, exclusion, and suspicion or work with those that stress the interdependence and equality of all human beings. The choice is yours.”
— Karen Armstrong