A designer takes you through a four-month journey to redesigning the Blinkist Library.

Audio is a big part of the Blinkist experience. Around 70% of Blinkist users listen to our content and when I joined the team last summer as a new product designer, I learned about an exciting new content format the team was working really hard to deliver early 2020: audiobooks! Our goal at Blinkist is to become the destination for the modern, lifelong learner and by introducing new content like audiobooks, it gives users the opportunity to expand the way they learn across a range of different formats.

The app library was originally built to house the 15-minute packs of key insights from books (which we call Blinks) and to support a variety of different features like highlighting text. When I took over and dived into the insights – with a combination of user research, customer feedback, and business analysis – we identified the following problems with the library:

We met with the research team and agreed a card sorting activity combined with user interviews that would give us valuable insights.

What is Card Sorting?

Card sorting is particularly useful when you need to clarify the information architecture of a product or website. According to usability.gov, “in a card sorting session, participants organize topics into categories that make sense to them and they may also help you label these groups. To conduct a card sort, you can use actual cards, pieces of paper, or one of several online card-sorting software tools.”

Why Did We Choose Card Sorting?

With the new content format, audiobooks, about to be released in the app, we wanted to make sure that both old and new user needs would be taken into account. So far, the design of the Library was pretty straightforward: a shortlist of titles that could be filtered by user progress, with a range of features accessible under tabs.

However, we were also facing other problems with the existing Library such as:

As we didn’t want to make any assumptions and decide for users whether to prioritize format over progress-state (i.e. not started, started, finished), we decided to combine two card sorting activities, starting and ending with a user interview to understand their behavior.

A card sorting activity provides a good understanding of the users’ subconscious expectations of how the information should be organized.

With this research we were hoping to achieve the following objectives:

I can’t thank my teammates enough for helping me write and iterate on the cards, draft the script, moderate or take notes during the sessions. Card sorting can be overwhelming and it’s very important to define beforehand both the goals and questions we want answered.

These are a few questions we needed to answer in order to redesign the library:

We defined the following success statements:

Open — In open card sorting, each participant is given a stack of cards.The participants are then asked to group those cards together in any way they want. Then they create labels for the groups that they chose. This method is commonly used for new/existing information architecture (IA) or organizing products on a site.

Closed — In a closed card sorting, the researchers create the labels for their respective groups. Participants are given a stack of cards and are asked to put each card into a group. This method is normally used when adding new content to an existing site or gaining a second round of insights after an open card sorting.

What happened when we tried card sorting?

We decided to have an open card sorting allowing the participants to group the cards together and create a label for each cluster.

This study can also be done remotely but I wouldn’t recommend it if you need to ask follow-up questions and dive into more details. We were focusing on the information architecture of the library and we didn’t have enough cards (our study included 21) to make use of a software to run it.

Once that was clear, we iterated on the cards. As our main question was format vs. progress, we didn’t want to lead the participants into grouping formats and progress together because of our choice of wording. We thought shuffling the words on the cards would avoid this and our first iteration used this pattern:

After talking with Temi, our Director of Design, we decided to test a second approach using a more explanatory wording to help the participants get into the context and move away from more technical language.

The second one used the following pattern:

We ran a quick test with two people who both felt confused and frustrated with the first approach while they found the second one straightforward and enjoyable.

We decided to exclude “functions” like search and filters to focus on the hierarchy of the cards and probe with a user interview to learn more about their rationale behind their decisions.

We initially thought of running a similar analysis to the one presented in this article but because of the low number of cards and the tie in the results (5 progress vs. 5 format) we decided to focus on the qualitative data and cluster the main findings among participants.

The main commonalities we identified among the participants helped us make decisions.

Highlights and quotes from the test:

An exploration phase started before Christmas, where we came up with different concepts and IA. This included a first round of iteration: speaking with the engineers early on to exclude any technical difficulties along with several design reviews to gather feedback from the team.

Two variations of the new proposed library redesign were tested at the end of January. Overall the two directions performed really well, the participants had no issues navigating through both libraries and could find the content they were looking for easily. We also wanted to test the information and cognitive load and were impressed to hear the testers describe the prototypes as calm, clean, simple and easy to use!

As I was analyzing the results of the tests, the priorities and focus of the bigger project changed slightly and I had to take a step back. The User Research team was preparing a diary study for the audiobooks and we decided we could benefit from gathering learning on original shows if they were added to the library by then. The mission team committed to add them to the app within two sprints and we slightly delayed the other library improvements.

After the official launch of audiobooks and new original shows, COVID-19 forced us to adapt to a remote life for a while and changed our priorities to work on features that would make more sense to both the business and our users. By then, users could already save episodes to their library and the team released two components unifying the list views in the same release as Dark Mode! This was an exciting project as we now have a consistent styling within the app and across platforms cleaning the inconsistent typography treatment for authors, titles and subtext, unifying the progress indicators for Blinks and using the same cover size.

We’re constantly improving the product and adding more features to the app. I’m very excited to gather some more insight on the way and to give more flexibility to our users. Being able to curate your own content and customize your experience the way you prefer makes you want to use the product even more. I hope everyone will be thrilled with the new updates! 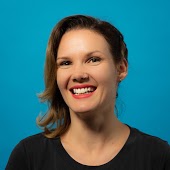 ABOUT THE WRITER
Eva Jobard

Eva is a Product Designer at Blinkist where she’s focusing on the users’ learning journeys. After work she’s spending most of her time cuddling her furry dog, creating art and listening to good tunes. Taking dance lessons here and there too.