Battle of the Big Ideas: Who Makes A Better Leader?

Loud and outspoken or quiet and reserved? Are extroverted or introverted personalities best suited to leadership roles in today's world?

Have you ever considered which characteristics make for a great leader? Or wondered if you yourself might someday inspire and motivate teams of people?

Leadership styles take all kinds of forms. You might prefer a firm, hands-on management style or a more gentle approach in guiding your team or being guided. Business leaders and social scientists go back and forth about which leadership methods garner the most success. Do introverts or more outgoing personalities produce better results? When placed in power, is it better to be “showy” or to show humility?

It’s a controversial not to mention fascinating discussion. In this post, we’re going to take a look at The Myth of the Strong Leader and The Introverted Leader for some very compelling arguments on the subject. 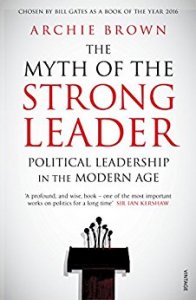 Archie Brown’s The Myth of the Strong Leader analyses why people tend to be drawn towards charismatic leaders. How is it that the perception of strength can be developed irrespective of one’s actual capacity to lead? The book also provides insight into how such leaders rise to power and why these individuals shouldn’t necessarily govern a democratic society. What’s clear from the outset of the book is Brown’s view that we need to give up this idea of a strong, all-powerful leader. Instead, we should embrace democracy’s messy, complex realities, which requires a sharper focus on humility, teamwork, and diplomacy.

One of the major factors allowing and encouraging such personalities to rise to power, Brown writes, is the focus by the media on the leader of a party, rather than the party as a whole. This shortsighted approach causes the public to overvalue this single figurehead. All the attention can cause an inflation of the party leader’s ego and instill the perception—into both the public and the leader—that this one person is more valuable than the other members of the party. As this process escalates, Brown argues, a country can drift away from democracy into the realm of totalitarianism.

Brown insists what really makes for a great leader is engaging with others’ ideas rather than simply dispatching orders. Qualities such as humility, modesty, and the ability to listen to expert advice should be rated as highly as perceived strength of character. By seeking out individuals who are knowledgeable in their fields, a leader will be better informed on the impacts of executive-level decisions.

If a leader is too egotistical and believes he or she knows enough already, then expert opinions may go unlistened to. This limited scope of vision then causes decisions to be made without an understanding of their ramifications, often bringing about poor outcomes. Brown sees truly successful leadership as collegiate; everybody works together towards common goals. Such an egalitarian outlook is often missing from “strong” or dictatorial leaders.

by Jennifer B. Kahnweiler 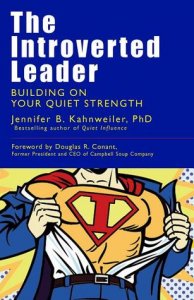 Jennifer Kahnweiler argues in The Introverted Leader that an introverted personality can be just as effective (if not more so) in a leadership role as an extroverted character. In her book, she reveals the secrets of successful, introverted professionals who work in what is typically seen as a business culture that favors extroversion and offers practical solutions to the challenges they need to overcome in order to compete in this environment.

Surprisingly, a large number (around 40%) of people in top positions in business identify themselves as naturally introverted, going against the popular assumption that this kind of leadership is reserved for extroverts only. With around 50-60% of the US population describing themselves as introverted, this revelation opens up the job market for many who may have never considered themselves suitable for a leadership role. There are however numerous obstacles that introverts need to overcome if they are to succeed.

Getting heard over the noise

A common problem for introverts in the workplace, Kahnweiler writes, is not getting their voices heard over the louder voices of their more extroverted colleagues. Despite having as good or even better ideas, a boss is more likely to choose a more vocal colleague to lead a project over a quieter one simply because the boss is probably too busy to spend time waiting for the introverts to speak up. Kahnweiler advises introverts to remember to make sure they give their bosses a subtle reminder of their performance so that their efforts don’t go unnoticed and to find a way for their ideas to be heard, even if it’s not in the more confrontational (and conventional) setting of a meeting room.

Misjudgment of introverts (by extroverts)

Being misjudged as slow or removed has stood as another challenge to introverts working their way up. Extroverts who are quick to say whatever comes to mind tend to fix this label on their introverted colleagues.

The reality is that introverts are unlikely to shout out their ideas without thinking them through in private first. Introverts like to take their time and come to solid conclusions before putting them to their team. This is actually a huge advantage in a leadership role, as it prevents hasty decisions and embarrassing faux pas being made on the spur of the moment, which are then difficult to retract later.

However, introverts do need to bear in mind how their quietness can be seen as coldness or aloofness to a more extroverted personality and should work towards explaining their behavior or preferred work method, rather than trying to change it, so that others can understand them better.

In these two books, we’ve seen the advantages that come with having an introverted, rather than an extroverted leader. An introvert is typically able to listen to the advice of others, collaborate well, think hard on every decision, and is unlikely to make unseemly public faux pas. We’ve also heard how nearly 40% of current business leaders in the US already describe themselves as introverted, which proves the success of introverted personalities at reaching the top of the professional ladder.

But trying to become a leader when one is an introvert doesn’t come without its hurdles. As Brown points out, the general public is naturally attracted to the confidence of an extroverted leader and the media seek to encourage this point of view, despite the lack of evidence to support this style of governance. Kahnweiler also notes that an extroverted person is quick to get his or her ideas heard, while an introverted person can be left struggling to have his work recognized at all.

This creates something of an uphill battle for introverts, who already find it hard to be heard against the backdrop of their more outspoken peers within the workplace. The tendency to not speak as much often becomes misread as aloofness or coldness. If introverts want to take on the extroverts to become thoughtful, diligent, and collaborative leaders—leaders under whom we would all be likely to benefit—then clearly communicating their valuable skills should be their first priority on their route to the top.

So which leadership style do you prefer? Have you found that one style or the other has led to better results for you or your team? We would be interested to know. Let’s add to this intriguing conversation.