Do you dream of achieving greatness in life, but think success is exclusively reserved for others? There’s plenty of prosperity to go around, and you can enjoy a surge of success by pushing past your limits.

Since the dawn of self-help books, countless authors have attempted to explain the secrets to achieving lasting success. And while many of those books have made valuable contributions to the nonfiction cannon, few have had as profound an effect upon readers as The 10X Rule: The Only Difference Between Success and Failure. 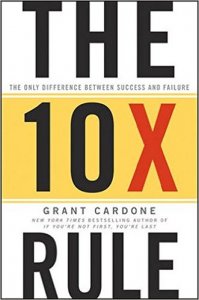 In the book, author Grant Cardone advises a no-nonsense approach to achieving success by going all-in in all areas of life. He explains that attaining success always requires more effort than initially anticipated, but by investing ten times as much energy and reaching ten times as far, success is all but inevitable.

If you’re ready to start making your wildest dreams come true, these 5 takeaways from The 10X Rule offer you the strategy you need to succeed.

1. To reach your full potential, be prepared to overcome the unexpected

Having an awesome idea doesn’t always equate to success. In order for any effort to truly take-off, it’s important to have the right mindset and the strength to deal with the unexpected. Remember that success has no limits, and it doesn’t have to come at the expense of others.

Rid yourself of any beliefs limiting your potential, and push yourself to achieve all you can. By setting your sights higher than your competitors, you’ll have an easier time overcoming unforeseen obstacles, and you’ll excel where others typically fail.

2. In the face of adversity, never hold back

When confronted with any decision, you can respond in one of four ways: retreat, do nothing, take normal action, or take massive action. Guess which option most frequently leads to success? Instead of defaulting to measured efforts, make a habit of massive action, and you’ll breach the boundaries of mediocrity by outperforming everyone else.

Aim to achieve ten times above whatever you consider average, and learn to start seeing opportunities where you once saw challenges. Remember that success doesn’t happen to you; it happens because of you. Avoid thinking of yourself as passive player in this world, and view yourself as a star instead.

3. Embrace obsession to achieve the incredible

In order for your dreams to come true, it’s necessary to obsess over them. But don’t dwell on any downsides; strictly focus on what’s working well. Share your obsession with others, and you’ll build an army of supporters to help you on your journey. But keep your passion under wraps, and you’ll be unlikely to inspire anyone.

Begin by identifying goals large enough to motivate you, and even if they seem absurd, go all-in to realize them. By investing 100 percent of your energy and resources toward your goal, nothing will stand in the way of you succeeding. Think outside the box and employ cleverness in your rise to the top. And above all else, avoid following in the footsteps of those who have failed.

4. Strive for growth while maintaining control of your time and emotions

Growth and persistence are key elements of any successful endeavor, which is why it’s better to fail while fighting rather than while running away. Free yourself of outside influences trying to control you, and press forward toward whatever it is you want to attain. Disregard other people’s negativity, and focus solely on achieving your goals.

Fear of risk can prevent you from accomplishing anything, and excessive pride can blind you to good advice. When confronted with such feelings, put your emotions in check and continue progressing toward your goal. And to further ensure your success, take full control of your schedule. Time is limited, it’s possible to overcome its restrictiveness by fostering a mindset in which everything’s possible. Consistently strive to achieve more in less time by more effectively managing your time and tasks.

5. Set meaningful goals, and protect your name at all costs

Attaining the heights of success begins by choosing proper goals. Whereas most people accept roles and goals imposed on them by society, set yourself apart from the masses by aiming far higher, and then acting on your intentions. This way, you’ll be more likely to exceed everyone’s expectations, while dealing with fewer unsatisfied customers. And while negative feedback is inevitable, be thankful for it, as it can also foster progress.

Finally, keep in mind that your name is your most valuable asset, and it should be synonymous with your message. Once your dream begins to takes flight, do as many successful companies do, and devote your entire effort toward expanding your audience, rather than maintaining customer satisfaction. The reasoning is simple: The more people talking about your brand, the further your name will travel, bringing you one step closer to success.

On your journey to the top, keep in mind that failing to meet an insanely high expectations is still preferable to accomplishing an unimpressive goal. Shoot for the stars, and if others start to think you’re crazy, that just means you’re on the right track.

Embrace a 10X mindset, and you’ll think bigger and work harder than ever before, meaning it won’t be long until the once unimaginable becomes a reality. Learn more of the key insights from Grant Cardone’s bestseller by downloading the Blinkist app today.