There’s Another Book About the Clinton Campaign — And This One’s Really Worth Reading!

This account of the Clinton campaign by award-winning journalist Amy Chozick is not without its controversy, but here’s why you should definitely read it.

Award-winning journalist Amy Chozick spent an entire decade chronicling Hillary Clinton’s relentless pursuit of the presidency. From Chozick’s late 20s as a writer for the Wall Street Journal, to her late 30s, as a leading reporter for The New York Times, her entire life revolved around the former First Lady whose political aspirations seemed to know no bounds.

Beginning in 2006, when Clinton was a New York senator running against a relatively unknown Barack Obama, till 2016 when she lost the most bonkers election Americans have ever seen, Chozick made covering Clinton’s quest for power more of a priority than her own personal relationships, professional goals, and even the decision to become a parent.

And now, in her book Chasing Hillary: Ten Years, Two Presidential Campaigns, and One Intact Glass Ceiling, Chozick offers an inside account of the events that actually unfolded during Clinton’s doomed campaign. 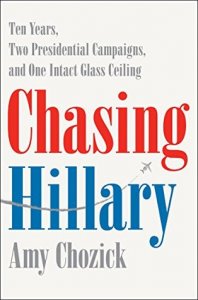 Part memoir, part political thriller, Chasing Hillary exposes the real story of what went on inside both of Clinton’s attempts to win the presidency, filled with the warts-and-all details many people have long wanted to know.

Find out what the mood was really like in Clinton’s campaign bus as it traveled across the country, and discover what actually happened at the candidate’s Brooklyn-based headquarters on 2016’s ill-fated election night. Chozick provides readers with a front-row seat to it all in a candid, uproarious narrative that’s almost too crazy to be true.

If you’re interested in learning all the dirty details from before Clinton’s first campaign started, to the night her second one abruptly ended, Chasing Hillary is a book you won’t want to miss. Here’s a glimpse of what you can expect to find.

Hillary’s campaign manager mocked her husband Bill behind his back.

Robby Mook, Clinton’s 36-year-old campaign manager, always acted very respectfully whenever the 42nd president was in the room. But according to Chozick, Mook actually viewed the impeached leader as an antiquated relic from another era. Mook would even impersonate the former Commander-in-Chief when he wasn’t around, mimicking several of his memorable mannerisms.

Bill Clinton warned his wife’s team that Trump was more in touch with voters.

Although Bill Clinton was among his wife’s staunchest supporters, the former president was seriously worried about how much appeal the Republican candidate would have with the white, working-class voters who constituted a large contingent of his base.

Chozick notes that during the early months of 2016, Mr. Clinton called his wife’s campaign headquarters on a near-daily basis, warning them all that Trump had a far keener understanding of the voters’ angst than the media gave him credit for.

A frustrated Clinton unleashed an explosive tirade while prepping to debate Trump.

During a debate prep session, several of the former First Lady’s handlers expressed concern over how authentic their candidate would come across to the millions of voters who’d be tuning into the televised event. Fed up with the criticism and overcome with pent-up animosity toward her opponent, Clinton unleashed what Chozick calls a “f***-laced fusillade” about how much of a “disgusting human” she believed Trump to be, then yelling, “You want authentic?! Here it is!”

At 9 p.m. on election night, Chelsea Clinton opened a celebratory bottle of champagne.

Hours before it became obvious that Trump would win, Chelsea Clinton was getting her hair and makeup done at a hotel, and she stopped to pour Veuve Clicquot into several of her friends champagne flutes, assuming that her mother was only hours away from delivering an acceptance speech. (The former “First Daughter” has refuted this claim, but Chozick has several sources and a professional fact-checker to back her up.)

Despite the polls’ predictions, Hillary always assumed Trump would emerge the victor.

After several key battleground states swung in Trump’s favor, it became clear to Clinton’s campaign manager that they’d lost the election. And when Mook finally worked up the courage to tell his boss that defeat was all but inevitable, she didn’t bat an eye. According to Chozick, the crushed candidate said, “I knew it. I knew this would happen to me. They were never going to let me be president.”

Chozick reluctantly admits she was a pawn in Russia’s game.

In the months following Clinton’s defeat, as it became increasingly obvious that the Russian government had attempted to influence the election, it became clear to Chozick that her coverage of the Democratic candidate’s infamous email scandal had played a role in the ultimate outcome. In fact, some of Chozick’s own colleagues call her a “de facto instrument of Russian intelligence,” an accusation that Chozick is now unable to deny.

Those are just a few of the juicy tidbits from inside of Hillary Clinton’s 2016 presidential campaign. To discover even more details about what really went down during the most explosive election in recent memory, check out the full set of blinks to Chasing Hillary, the latest addition to the ever-expanding Blinkist library.