Whether we succeed or fail often depends on our mental state

We’re here with a series of psychology hacks that can help you in under a minute. 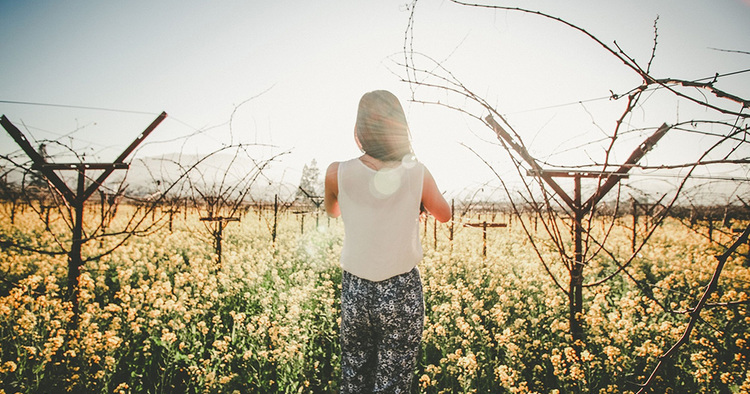 The human body is astounding. As delicate as it is resilient, it’s capable of amazing feats like childbirth, ultra marathons, and sitting through that onerous board meeting for three hours without completely shutting down. Our bodies get us from point A to point B, but it’s our minds that interpret, structure, and define our entire world—and what’s more, give it meaning.

Unfortunately, our minds don’t always play nice. They can sabotage us by sending unhelpful messages, like “that’s never going to work” or “you’re such a loser” —signals from the brain which essentially eat away at our motivation and self-esteem.

So whether you want to rock that job interview, learn better, or feel better, how can you get your thoughts and emotions to work for you rather than against you? Glad you asked! I’m a practicing psychologist, and I’ve combed through some of today’s great books on the mind to put together 7 little mental exercises you can do in 60 seconds or fewer that can help you be more successful in whatever you do. 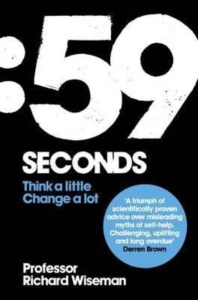 If you blocked off another hour tonight to rehearse your presentation for the eleventy-billionth time, blowing it off for Netflix might be the better choice. It turns out that competent people actually appear more attractive and likable when they falter rather than when they try to be perfect.

Richard Wiseman, experimental psychologist and author of the book 59 Seconds, explored this when he chose two actresses to demonstrate a blender before an audience.

One actress performed perfectly and appeared highly knowledgeable. The other ran into some trouble: the blender’s lid came off and she spilled fruit juice all over herself. Although the crowd found the first demonstration professional and convincing, the second actress came out on top in terms of likability. When asked to explain their ratings, people said they couldn’t relate to the flawless first actress, but warmed to the second actress, who showed a more human side.

This isn’t a recommendation to force a fleet of silly slip-ups for the sake of being likeable, but Wiseman says that there is an easy way to up your likeability factor: reveal your weaknesses. Studies show that those who confess their weaknesses early on when talking about themselves will be rated as more likeable.

Read the highlights of 59 seconds by Richard Wiseman on Blinkist

2. The future is an insight engine 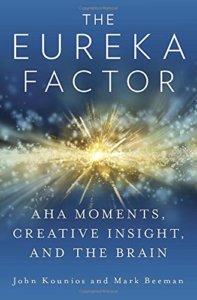 Getting to “eureka!” is actually a lot easier than you might think.

John Kounios and Mark Beeman, authors of The Eureka Factor, say that using your imagination in two uncommon ways—one that changes the present, and one that affects the future—can help prod inspiration out of its sleepy hidey hole.

1. Pretend you’re someone else. One way to foster creative, non-conformist thinking is to play a little make believe. Imagine yourself in the role of someone notoriously less conformist. For starters, you could try donning the persona of a punk—Kounios and Beeman found that this mindset encouraged creative thinking!

2. Use distant-future thinking. Thinking about what’s to come encourages creative freedom, but there are two different mindsets with which you can approach it: near future or distant-future thinking. Imagine winning a trip to Tokyo either tomorrow or in one year. In the first scenario you’d likely picture how to get to the airport and collect your tickets, whereas in the second scenario, you’d conjure up the scent of cherry blossoms or the hustle and bustle of downtown Tokyo. The second set of images is far more creative and associative because thinking about the farther future permits more possibility and less analysis. Spend a minute to allow your thoughts to drift further into the future and you’ll be surprised by what you come up with. 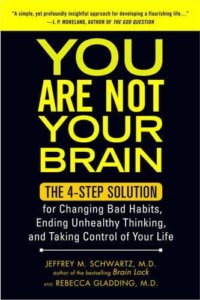 You sit down to do some research or prepare a presentation, and 45 seconds in you’re overpowered by the urge to check your email or have a peek at Facebook. You work for five minutes, and then you’re back to your feeds. Jeffrey M. Schwartz explains this un-productivity loop in You Are Not Your Brain.

When we act out an unhealthy behavior, it provides us with a sense of relief from distressing sensations, in turn wiring our brain to connect this behavior to a temporary high, which strengthens the habit.

For example, if the brain sends a message like “I’m not good enough,” and we try to nix the thought by acting out a stress habit — like looking for other people’s reassurance on Facebook — then we will be hooked on those temporary fixes. Luckily, there’s a method called the Four Steps to help you bust your brain out of this unhelpful cycle and focus on what matters.

1. Relabel by saying what’s happening: e.g., “I’m having the urge to go on Facebook.”

2. Reframe by reminding yourself why it’s troubling you: “Checking Facebook reduces my anxiety that I might not be able to complete the work I should be doing.”

3. Refocus by doing something productive like beginning the easiest work task.

4. Revalue by recognizing that this impulse to procrastinate is just a deceptive brain message, and needn’t be taken seriously.

Read the 15-minute version of You Are Not Your Brain on Blinkist. 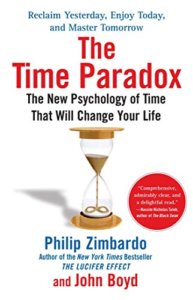 The memories we have create the life we’re living now, but rather than appearing accurate on the cinema screens in our minds, memories are reconstructed in accordance with our current attitudes and beliefs. This means that what matters most about the past is your attitude toward it. In light of that truth, hear this—a little self delusion is actually recommendable.

Research shows that people who view the past positively are happier, healthier, and more successful in the present than are the negative thinkers. Past-positive people are still happier even when their positive attitude is based on an inaccurate recollection of events. Philip Zimbardo and John Boyd cite a study in their book, The Time Paradox, in which psychologists found that looking at the past through rose-tinted lenses is the key to cultivating the gratitude necessary to appreciate life today.

You’ve heard it before, but here it is again: gratitude is the key to happiness. While you can’t change the past, you can change how you feel about it. Take a minute to muse on things for which you feel grateful, whether they happened yesterday, last week, or just a couple of hours earlier. A bit of thankful reframing may be enough to change the whole picture, and transform a past negative into past positive.

Read the 15-minute version of The Time Paradox on Blinkist. 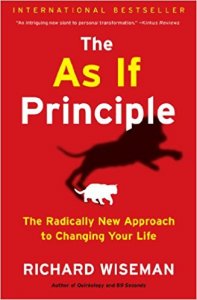 Pragmatist philosopher William James believed that if you behave as though you already have a certain desired quality, you will magically end up having it. James explored this idea through studying facial expressions, postulating that people don’t smile because they’re happy, but rather that they’re happy because they smile. It turns out he was right—and not just locally, either.

American psychologist Paul Ekman found that this sort of principle exists all over the world, regardless of culture, from the United States to remote islands in Indonesia. When people look frightened, their heart rate speeds up and their skin temperature drops. When they smile, their heart rate falls and their skin temperature rises. This is very positive news for you in that it means you’ve got a heck of a lot more control over your feelings and mental state than you might have believed.

Heading out for a work day you don’t really want to face? About to step into a meeting that’s guaranteed to consume your entire afternoon? (maybe you should fix that, by the Smile. Act as if you’re excited to be heading to the office and feeling open and friendly and you’ll actually nudge your behavior in that direction.

Read The As If Principle in 13 minutes on Blinkist.

6. Hug your houseplants for more creativity

We’re all shaped by our environments. This phenomenon is called priming, and it happens even when you’re not consciously aware of it. Believe it or not, beyond cleaning the air and making your room a little nicer, plants and flowers also prime your creative mind to get to work.

Richard Wiseman’s book, 59 Seconds, cites a study in which researchers asked a group of people to execute various creative tasks in rooms with plants or with racks. It was found that the people who got to hang out with the plant performed significantly better with creative tasks.

Make it better in a minute:

Hit the plant shop. Go outside. Whatever you need to do to get near some greenery, do it now and enjoy the flow of ideas that follows.

Read the 15-minute highlights from 59 Seconds by Richard Wiseman on Blinkist. 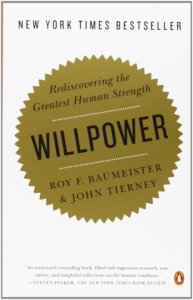 Do you think that your strength of will is already set somewhere between 1 and 10 when you come charging from the womb? Guess again! You can train your willpower exactly like a muscle. Better yet, by making just a small will-boosting change you can fortify self-control in other areas of your life, too.

Roy F. Baumeister and John Tierney’s Willpower cites a study in which people who weren’t habitual exercisers (but who wanted to improve their fitness) were given a plan for regular workouts. By following this simple plan in the gym, their willpower improved elsewhere: in lab settings where they performed tasks without becoming distracted by a nearby television, and in real life, where they ate more healthily and cheerfully did chores.

When they exercised their self-control by following their workout plan, these study participants also strengthened their willpower in general.

Baumeister and Tierney say starting small can make a big impact. They suggest making the decision to say “yes” and “no” rather than “yeah” and nope,” as a very low-barrier-to-entry way to start building up your strength. Ready to give it a go? (Say yes!)

Read the highlights of Willpower by Roy F. Baumeister and John Tierney on Blinkist

If you’d like to learn more about how to influence your own mind—and that of others—take a look at the 7 most useful truths you missed from psychology class or go check out the psychology section of Blinkist! Got questions? Leave me a comment and let’s talk! 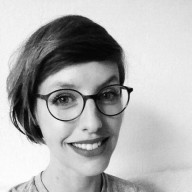 ABOUT THE WRITER
Johanne Schwensen

Johanne Schwensen is a psychologist. She writes on the human mind, self-help, negotiation, and happiness. Johanne practices therapy in the heart of Berlin and organizes various psychology-related activities and discussions in the city.