Visionary physicist Stephen Hawking died in the early hours of Wednesday morning, March 14th, at his home in Cambridge. Here are 7 lesser-known facts about him.

Today, the world lost one of its greatest scientific minds and strongest proponents of the power of curiosity. He died on Albert Einstein’s birthday — which also happens to be Pi day (3.14) — and few other scientists since Einstein have captured the public imagination like Hawking, with the possible exception of Carl Sagan.

“We are just an advanced breed of monkeys on a minor planet of a very average star. But we can understand the Universe. That makes us something very special.”
— Stephen Hawking

In 1963 at the age of just 21 years-old, he was diagnosed with motor neurone disease and doctors said he wouldn’t live another 2 years. He managed — and let’s face it, crushed — another 55. He was living proof of the power of mind over matter. “Although there was a cloud hanging over my future”, he said, “I found, to my surprise, that I was enjoying life in the present more than before. I began to make progress with my research.”

It was this persistence, good humor and unquenchable curiosity that made him an unlikely figurehead in pop culture, through which Hawking, his motorized wheelchair, and synthesized voice became recognized worldwide. He had a dizzying number of TV cameos under his belt and his life story was made into an Oscar-winning movie. 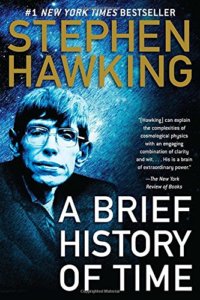 He rose to fame through enormous efforts to popularize science, which began with the publication of his groundbreaking popular science book, A Brief History of Time. It was subsequently translated into 40 languages and sold over 25m copies worldwide. During his lifetime, he dedicated so much of his energy to breaking down the barriers between people and scientific discovery. In honor of that, here are seven facts about the man himself.

1. He defied all the odds in relation to ALS

When diagnosed with amyotrophic lateral sclerosis (ALS) doctors initially predicted that the physicist would live only two more years. Medical Daily writes that roughly just 10% of people with this diagnosis live more than 10 years. Hawking persevered for five times that and was one of the longest — if not the longest — surviving people with ALS in history.

2. He had a wicked sense of humor

The Face magazine approached him in 1993 requesting a formula for time travel. His response, as recorded by Letters of Note, was thus:

3. He identified with The Flying Dutchman

It is largely documented that Hawking turned to Wagner for solace when he received his diagnosis. His wife Jane Wilde wrote that he identified specifically with Wagner’s opera The Flying Dutchman — the story of a legendary ghost ship that can never dock and is doomed to sail the oceans forever.

4. He scraped a first in his degree at Oxford

During his three undergraduate years at Oxford, he estimated that he spent just 1,000 actually working. His final grade fell on the cusp of first and second class honors. However, he was convinced that his professors regarded him as difficult so he told his viva examiners that if he got a first, he’d leave Oxford to pursue his Ph.D. at Cambridge. If he got a second, he’d stick around to try his luck at Oxford. They awarded him a first.

5. He warned against AI

In 2014, Hawking stated that he believed efforts to create thinking machines posed a threat to the continued existence of humanity. “It would take off on its own, and re-design itself at an ever-increasing rate,” he told the BBC. “Humans, who are limited by slow biological evolution, couldn’t compete, and would be superseded.”

Hawking was no stranger to a scientific wager. However, he was rarely on the winning side. In 1990, he lost a Penthouse subscription in a bet he made against US physicist, Kip Thorne in 1975, that the cosmic x-ray source Cygnus X-1 was not a black hole. In 1997, he joined forces with Thorne and bet John Preskill an encyclopedia that information must be lost in black holes. He conceded in 2004. And more recently, Hawking bet Gordon Kane $100 that the Higgs Boson or ‘god particle’ would not be discovered. In July 2012, Cern had some bad news — delivered in comic sans.

7. A Brief History of Time holds a world record

First published in 1988, the title stayed on the Sunday Times bestsellers list for 237 weeks (that’s over 4 and a half years)! And that, folks, is what it takes to wrest a Guinness World Record.

Hawking may have left the planet, but his work and zeal with which he wrote and talked about science will long be remembered. He’ll also surely go down as one of the all-time greatest deliverers of sick burns. And that is no small legacy.