If You Can Count To 5, You Can Change Your Life

The five-second rule is probably more associated with eating food that’s hit the floor than with making life-altering decisions. But in actual fact, taking a moment to count to five can help you to make better decisions, and to help you react rationally when you’re thrown into difficult situations. If you want to change your behavior and make better choices, check out these insights from The 5 Second Rule by Mel Robbins. 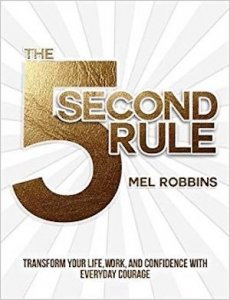 Using the five-second rule has been proven to suppress unhelpful impulses. For example, if your first reflex upon waking up is to moan and hit the snooze button on your alarm clock, instead count down from five. This will redirect your attention to your responsibilities — getting up on time — and help you reassess your true priorities. It also works when you’re feeling angry; it could get you out of hot water from saying something you don’t really mean or that you could have worded differently.

In situations where we feel out of control, which is the essence of these two examples, simply stepping back from the situation will in fact create more opportunities for us — which puts us in a better position to take back control.

The Power of the Push

Small decisions can change the course of history. While, in our day-to-day lives, statistically few of us will make waves as big as Rosa Parks did when she refused to give up her bus seat to a white man, we do have opportunities under our noses that we may miss if we don’t take a few seconds to notice them. These may include moments to be more courageous and confident — which can lead to significant changes in our own lives, if not others’.

They say that life starts outside your comfort zone. If you use five seconds in a pivotal situation to do something that you might not always dare to, you may be surprised with the results. This could include speaking up in a meeting at work when you’re usually too shy, or indeed an act of moral courage towards a stranger.

The number of great things we miss out on because we keep waiting for the perfect moment are often innumerable. Take Steve Wozniak and Steve Jobs, the co-founders of Apple no less. When they were offered funding in 1977, Wozniak initially declined as he was worried about quitting his day job. His friends convinced him to take the leap. Sometimes, you need to trust that an opportunity has come to you at just the right time.

When you’re faced with a choice that seems exciting yet nerve-wracking at the same time, use those five seconds to truly tune into your intuition. Is it fear or rationality that’s holding you back? Don’t miss out on something good because you’re scared of what could go wrong.

You can’t control your feelings, always, but you can control your actions — and that includes what you do with a feeling. Emotions guide 95 percent of our decisions, estimates neuroscientist Antonio Damasio. In his research with brain-damaged people unable to experience emotions, he found that while they could argue for and against a certain choice, they could not make decisions. Now, that’s invaluable knowledge that can be used next time you’re in a situation where your emotions are clouding your ability to settle on the right choice. Utilize the five-second rule as your own personal time-out session: identify what you would opt for independently of your emotions. This will also help you build your self-confidence, as you become more and more skilled in the art of letting your head guide you, rather than your gut.

Ah, who hasn’t succumbed to the allure of procrastination? Whether we are studying for exams, have a work deadline, or simply need to get some chores done around the apartment, doing anything but what we’re supposed to can lead to frustration and a rushed job that we’re usually dissatisfied with. Luckily, similarly to the earlier snooze-button example, the five-second rule is there to help you out. When you procrastinate, you tend to make excuses to yourself justifying why it is not, in fact, procrastination. Next time you catch yourself doing it, be honest and take five seconds. Reflect on the fact that procrastination is actually a reaction to stress or discomfort, rather than laziness — and view it as a loss of control. If you just do something, instead of putting it off, it is easy to regain your grip on your own life and how you spend your time.

Turn Your Worries Into Mantras

Anxiety is on the rise — that’s a fact. Paying attention to yourself and noticing patterns is the best treatment. When you feel signs that you’re about to enter a worried state, close your eyes, if you can, and count down from five. This will recenter you, allowing you to shift the focus towards the present and not towards past regrettable actions or future might-happens. Making use of the five-second rule will allow you to see the bigger picture.

While some worries are indeed rational, most of what occupies our minds is in fact a byproduct of overstimulation — which occurs when we’re too focused on the chaos of the outside world. Even if it takes more than five seconds, it’s never a bad time to step out, give yourself a break, and put the things that make life worth living back at the forefront.

Want to learn more about how a simple countdown could change your everyday life? Check out the key insights to The 5 Second Rule on Blinkist. If you find you want more afterward, browse through the library of over 2,200 titles Blinkist offers.

ABOUT THE WRITER
Rosamund Mather

Rosamund is from Eastern England and has been living in Berlin since 2014. In addition to writing, she is a translator from German and French. She enjoys making hummus, taking in the sweet smell of new books and magazines, and trying to achieve an optimal balance of lived-in and minimalistic in her flat.

@spookytofu
Start free Blinkist trial
A small investment, an incredible growth opportunity: Get access to powerful ideas from top nonfiction books and podcasts.
Start your free trial
Get the best of Blinkist
Upgrade to Premium now and get unlimited access to the Blinkist library. Read or listen to key insights from the world’s best nonfiction.
Upgrade to Blinkist Premium
Our Top 3 Reads: