Whether you’re trying to make a good habit stick or break a bad habit, James Clear’s Atomic Habits shows you how to do it. Here are the 5 most useful lessons from the book.

Atomic Habits is a big book built on a simple idea: that our habits can help us succeed in life. Written by James Clear, the book outlines how to make good habits, break bad habits, and how daily habits can add up to incredible changes. 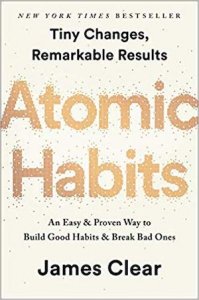 Clear brings in research from the fields of psychology and neuroscience to explain how habit formation works, and he shares real-life examples from the likes of Olympic gold medalists and CEOs, so you can see how it’s done.

And the ideas in the book have proven popular. Atomic Habits has sold over 8 million copies worldwide, Arianna Huffington said it was one of her all-time favorite books, and Brené Brown said it changed the way she lives and leads.

Want to learn the powerful ideas inside the book fast? The Blinkist app can help. Blinkist gathers key insights from nonfiction books and shares them as 15-minute explainers you can read or listen to.

Beyond Atomic Habits, there are 5,500 titles to choose from across 27 categories like personal development, psychology, and entrepreneurship.

“Blinkist caters to readers with more curiosity than time.”
– TechCrunch

And Blinkist is offering its explainer of Atomic Habits for free on both the phone and web app. Want to know what to expect? Here are key takeaways you can use to already start building better habits.

Our small daily behaviors might not have an immediate impact on our lives, but they do add up to massive changes. For example, one 20-minute run isn’t going to do much for your health, but running for 20 minutes every day will transform how you look and feel — it just takes time.

Clear says that when your lack of progress gets you down, make sure your small daily behaviors are taking you in the right direction, and over time, you’ll see results.

A cue is what triggers you to do a habit. When trying to implement a new habit into your life, make the cue as easy and obvious as possible.

For example, if you want to make practicing guitar a daily habit, don’t hide the instrument away in a cupboard. Keep it somewhere you’ll easily see it, triggering you to pick it up and practice each day, solidifying the habit.

A key part of getting a new habit to stick is reward, or getting a hit of dopamine after successfully doing a behavior. But what if you’re trying to build a less-than-enjoyable habit?

Clear says to try “temptation bundling”. This is when you pair your undesirable habit with something you enjoy.

This could be running on the treadmill while watching Netflix, for example. This way, the dopamine hit from the enjoyable activity will help make the less-than-fun one easier to adopt.

As well as making new habits enjoyable with temptation bundling, you should also make them as easy as possible to help them stick.

What does that look like in the real world? To make sending greeting cards easy, Clear’s wife keeps a box of cards organized by the occasion. Taking the batteries out of the remote control, on the other hand, increases the friction of watching TV, as it requires more effort to turn it on.

Key Message 5: Break Down Big Habits with the 2-Minute Rule

Big goals can feel overwhelming — running a marathon or learning French take time and hard work. Clear says the 2-minute rule can turn big dreams into small, achievable habits you can do in two minutes.

Instead of running a marathon, build the habit of putting on your running gear every day after work. Instead of mastering French, work through one page from a textbook over breakfast every day. Once you’re two minutes in, you’re likely to keep going anyway.

Learn more powerful ideas from Atomic Habits on Blinkist, where the explainer is now available for free. Here’s how the app works.

You’ll get real-life case studies, actionable advice, and stand-out quotes, so you’ll walk away with everything you need to know about the book. Plus, you can read or listen to the Blinkist app making it easy to fit learning into your day while commuting, cooking, or working out.

“When we started most apps were for social media or gaming. We wanted to do something different and build an app that would add genuine value to someone’s life.”
– Holger Seim, CEO of Blinkist

Blinkist has one raving fan in particular: Apple.

Apple named Blinkist one of the world’s best apps and one of the top 20 apps for lifelong learning. Even Apple’s CEO, Tim Cook, is a fan, and he even stopped by the app’s Berlin office to check it out for himself.

Outside of Apple, Blinkist is loved by the likes of The New York Times, Forbes, and it’s won awards from Google and the UN.

“With Blinkist, you can boost your knowledge and gain new perspectives so that you can be a better professional, a better partner, or a better you.”
– The United Nations

Users love it, too — Blinkist has 94,000 5-star ratings and 10,000 daily downloads in app stores. And 22 million users worldwide now turn to Blinkist to get powerful ideas from nonfiction books in bite-sized explainers.

Want to get Blinkist’s explainer of Atomic Habits for free? Learn on the web app or download the phone app and search for the book.