4 Dirty Tricks to Win Any Negotiation

Your crash course in the dark arts of getting your way 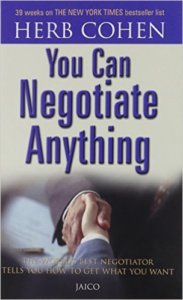 You Can Negotiate Anything

You Can Negotiate Anything

Once upon a time at a Mexican hotel, Herb Cohen, author of You Can Negotiate Anything, was told that there were no more rooms available. Instead of leaving defeated, he calmly asked for the manager and asked one question.

“Would you have room for the President of Mexico if he showed up?”
“Sí, Señor,” said the manager.
“Well, he’s not coming, so I’ll take his room,” Cohen replied.

And they all slept happily ever after.

Life is a constant stream of negotiations. Whether you’re trying to get your son to behave at a fancy restaurant or your boss to give you a raise, any situation where you try to affect someone else’s behavior is a negotiation. So, isn’t it time you start improving your skills?

Herb Cohen advocates win-win negotiating, where the goal is to bargain fairly and openly so that everyone’s needs and desires are satisfied. But this article’s not about that.

This article is about the dirty, underhanded tricks you can use to win any negotiation against your opponent. These manipulations are meant to extract concessions from your opponent, even if they really don’t want to make them.

We’re not here to be fair. We’re here to win.

#1. Let your opponent’s deadline breathe down their neck.

Before any negotiation, try to find out as much as possible about your opponent’s situation. It’s especially important that you know when their deadline for concluding the negotiation is, because this can translate into a significant advantage for you.

Once, Herb Cohen was tasked with negotiating a deal in Japan. His hosts insisted that before getting down to business, he experience Japanese hospitality and culture. Serious discussions did not begin until the last day of his two-week stay. The author, desperate to not go home empty handed, was forced to negotiate on the way to the airport. His weak position resulted in a deal his superiors called, “The first great Japanese victory since Pearl Harbor.”

So if you’re negotiating with, for example, a supplier who’s visiting from somewhere far away, try to keep them entertained as long as possible while stalling the actual negotiations they’re meant to be working on. Then, at the last-minute, start dictating your terms. At this stage, your opponents will be worried about the reception they’ll get if they come home empty-handed, and will be willing to do almost anything to close the deal.

#2. Make your opponent invest time and effort in the negotiation – they won’t want to see it wasted.

Another key method for getting what you want from your opponent is forcing them to invest blood, sweat, and tears in the negotiating process and then threatening to walk away. Sounds psychologically punishing and brutal? It is. And it works.

Imagine you’re trying to buy a fridge at a department store. Instead of going straight for the model you want, you ask the sales clerk to show you every single fridge in the store. You ask heaps of technical questions, forcing him to dig up manuals for each model, and then you say that you’ll have to think about it. The next day, you come back with your brother (or a friend who looks like he could be) and ask the sales clerk to again demonstrate every model in the shop since your brother “knows about fridges.”

After this rigmarole, do you think the sales clerk will be more likely to give you a discount? Absolutely – because he’s already invested several hours of time into you, and a discount will seem like a small cost to make the sale.

Similarly, the representatives of any business will be horrified if you make it seem like they’ve put in two weeks of work for a deal that now might not happen, so they’ll be much more willing to grant you concessions.

Of course, to be persuasive and influential in a truly insidious way, you need to know which psychological buttons to push in your opponent. This is where we turn to the landmark social psychology book Influence by Dr. Robert Cialdini, where he outlines many of the tools salesmen, advertising professionals, and conmen use to manipulate us.

#3. Do your opponent a favour and they will bend over backwards trying to repay you. 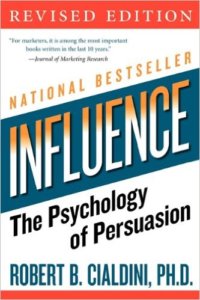 by Robert B. Cialdini

Before starting your negotiation, give your opponent a small gift. Depending on the context, this could be as simple as buying them lunch or bringing them a fancy cup of coffee from the artisanal roastery downstairs. Why butter them up? Simple.

According to Cialdini, the rule of reciprocation states that we feel a duty to repay others in kind for whatever they have provided to us. If someone does us a favor and we do not return it, we feel a psychological burden.

Several experiments have shown that people are so keen to rid themselves of the burden of debt that they will perform much larger favors in return for small ones. For example, when a researcher, “Joe,” bought test subjects a ten-cent Coke as an unbidden favor and then later asked them to buy raffle tickets, on average they reciprocated by purchasing 50 cents’ worth of tickets. This was twice the amount compared to what they’d throw in if Joe didn’t give them a coke first.

The Krishna organization used just this tactic to great effect when they gifted flowers to passersby on the street. Though generally annoyed, people often made donations to the organization to return the floral favor.

So, give it a try. Grab that pre-meet coffee or a nice stationery set – your opponents will feel bound to reciprocate. And since they probably didn’t have the foresight to bring a basket of scented soaps and chocolates with them, the only channel through which they can reciprocate is by making concessions in your business negotiation.

Just as we desire to pay back favors, so too do we feel obliged to match concessions in negotiations. If a scout first asks you to buy a five-dollar raffle ticket, but then retreats to offer a one-dollar sweet, you are likely to buy the sweet to match his “concession,” whether your sugar tooth’s clamoring or not.

This is the rejection-then-retreat strategy, and it is astonishingly powerful. In addition to activating a desire to reciprocate concessions, it also evokes the contrast principle: when two items are presented to us one after the other, the difference of the second to the first is magnified. Thus, the sweet in the earlier example seems disproportionately cheap after the raffle ticket. Similarly, the second offer you make to your opponent will seem very reasonable in contrast to your preposterous first one.

The rejection-then-retreat strategy has felled giants. Let’s look at the infamous Watergate-scandal: In 1972, the re-election of President Richard Nixon seemed inevitable, yet somehow a man called G. Gordon Liddy managed to convince the Committee to Re-elect the President (CRP) that they should give him 250,000 dollars to burglarize the offices of Democratic National Committee, located in the Watergate complex.

This was a risky undertaking, but Liddy used the rejection-then-retreat strategy: He started by suggesting a one-million-dollar scheme involving kidnapping, mugging and prostitutes. Though his later second and third proposals were still scandalous and incredibly ill-conceived, the CRP felt they had to “give Liddy something” for his concessions from his first scheme. Also, compared to the initial one-million dollar proposal, which of course was outrageous, the 250,000-dollar scheme involving “mere” burglary no longer sounded that bad. The resulting scandal, after the burglars were caught, eventually forced Nixon to resign.

These strategies are manipulation, pure and simple, and you shouldn’t expect much sympathy if you’re caught using them. But if you’re facing a one-off negotiation that you need to win at any cost, these will clinch the deal.

ABOUT THE WRITER
Ben Hughes

Ben Hughes is the head of content at Blinkist, a service that lets you read the key lessons from the latest and greatest nonfiction books in 15 minutes or less. Ben is a former management consultant with a background in corporate strategy, psychology and applied maths.